Although the world’s oceans are vast, their capacity to withstand damage caused by human activity is limited, compromising their critical contribution to the future of sustainable development, Secretary-General Ban Ki-moon declared today as the United Nations kicked-off its celebrations for the 2015 edition of World Oceans Day.

“Oceans are an essential component of the Earth’s ecosystem, and healthy oceans are critical to sustaining a healthy planet,” the Secretary-General affirmed in his message for the Day.

“Given how critical oceans are to the health of our planet and the prosperity of people, they are an essential element in our emerging vision for sustainable development, including the new set of sustainable development goals now being prepared to guide the global fight against poverty for the next 15 years.”

Two out of every five people live relatively close to a shore and three out of seven depend on marine and coastal resources to survive, according to Mr. Ban, who added that the world’s oceans also help regulate the climate, process nutrients through natural cycles and provide a wide range of services, including natural resources, food and jobs that benefit billions of people.

The growing threat of climate change, however, has posed an increasing challenge to their health and productivity, particularly as oceans absorb a large portion of greenhouse gas emissions and are becoming more acidic as a result.

“Ocean ecosystems are degrading. Corals, which sustain so much of marine life, are vulnerable to bleaching and even death caused by warmer temperatures,” the UN chief affirmed. “The science is clear: humans have caused changes to the climate system that are linked to the warming of oceans. Sea-levels are rising, with devastating effects on vulnerable communities, especially people living in small island developing States.”

The UN General Assembly has recognized oceans and seas as an important part of sustainable development – as envisioned by the Millennium Declaration and its landmark anti-poverty goals (MDGs). Looking now to craft a successor post-2015 sustainable development agenda, Member States have identified protecting oceans as one of the keys to creating a better, cleaner future for the planet.

Since 2009, the UN family has come together each year, urging communities to ensure that our oceans remain clean and healthy. This year’s theme Healthy oceans, healthy planet spotlights the damage oceans sustain due to human pressures including overexploitation, illegal, unreported and unregulated fishing, destructive fishing, as well as unsustainable aquaculture practices, marine pollution, habitat destruction, alien species, and climate change.

As Member States prepare for a crucial year of landmark agreements on climate change and ending poverty, success, Mr. Ban explained, “will demand that they look at the essential role of world’s oceans.”

“World Oceans Day is a chance to strengthen our resolve to appreciate, protect and restore our oceans and their resources,” he concluded. “In this potentially pivotal year, we must commit to using the gifts of the oceans peacefully, equitably and sustainably for generations to come.”

Echoing this message, Irina Bokova, Director-General of the UN Educational, Scientific and Cultural Organization (UNESCO) said that a sustainable planet cannot exist without a healthy ocean and with a few months to go before the 21st Conference of the Parties to the UN Framework Convention on Climate Change (COP21) and the shaping of a new global sustainable development agenda, “this message has never been so important.”

Whether landlocked or coastal, every country and every form of life depends on the health and function of the world’s oceans, which are at the centre of the global climate system, regulating weather and climate, the concentration of gases in the atmosphere – including the oxygen we breathe, the cycling of nutrients, and providing important food resources.

To better assess the impact of human activity and to propose alternatives, UNESCO works to nurture the power of education, culture, sciences, and communication as development multipliers, to share knowledge with all societies on sustainable development and climate change.

“Through our Intergovernmental Oceanographic Commission, we are leading ocean observation systems of unique value for climate research – mobilizing experts to discuss new findings and trends on ocean warming and acidification and exploring the role of the ocean in mitigating climate change,” Ms. Bokova said.

On the occasion of World Oceans Day 2015, UNESCO with the support of partners, is organizing a major event at its headquarters in Paris on the role of the ocean in the climate system ahead of the global climate change negotiations.

“On this World Oceans Day, I call on Members States, civil society and the private sector to join forces to raise awareness and to promote global action on the importance of the ocean in the global climate system – our future depends on it,” she declared. 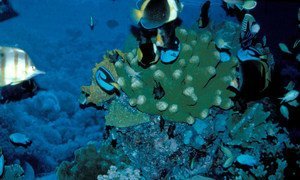