FAO/Giulio Napolitano
A wide view of the Plenary Hall during the opening of the FAO Conference in Rome.
6 June 2015

Incumbent Director-General of the United Nations Food and Agriculture Organization (FAO) José Graziano da Silva was today re-elected to a second term in the agency's top post with the highest number of votes ever in the history of the FAO.

The election took place on the first day of FAO's biennial governing Conference, which is running in Rome, where the agency is headquartered, through 13 June. According to a press release, in ballot by FAO member countries today, Mr. Graziano da Silva received a total of 177 out of 182 votes cast.

Nominated by Brazil, Graziano da Silva was the only candidate during this year's election cycle. His new term will run from 31 July 2015 to through July 2019.

Since taking up the post of FAO Director-General, Mr. Graziano da Silva has spearheaded major transformational changes within the Organization, making FAO more responsive to its Members' needs.

He sharpened the focus of FAO's work on five strategic objectives, with the new goal of totally eradicating hunger and malnutrition. He also reinforced institutional capacities both in the agency's headquarters and in the field; found significant cost-savings by streamlining administrative procedures; increased collaboration with external partners; and enhanced support for South-South Cooperation.

Mr. Graziano da Silva joined FAO in 2006 as the head of its Regional Office for Latin America and the Caribbean and was first elected Director-General on 26 June 2011. Prior to that, he led the team that designed Brazil's highly-successful 'Zero Hunger' ('Fome Zero') programme and led its initial implementation.

José Graziano da Silva is the eighth FAO Director-General since the Organization's founding in 1945. 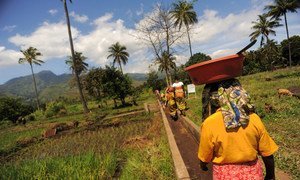 The head of the United Nations Food and Agriculture Organization (FAO) today called for a global movement to eradicate hunger as countries look ahead to the new set of development goals that will be adopted in September.