UNV
UN Youth Volunteer Stepanka Pechackova, is fully funded by the Czech Republic, and works as a Communications and Outreach Youth Officer with UNV and UNDP in Mongolia.
5 June 2015

“By creating environments for people to volunteer their time, it is possible to use their skills and knowledge for the common good in the sphere of governance,” Richard Dictus, UNV Executive Coordinator said today on the release of the report.

“Change will occur with greater civic engagement broadening the number of people who have voice, who can participate and who can hold governance actors to account.”

The State of the World’s Volunteerism Report 2015 is the first global survey of the contribution of volunteers to better governance, a prerequisite for the success of the new sustainable development goals to be agreed at the United Nations in September. According to the study, the new agenda will only succeed if it looks into ways to engage communities more effectively, including through the power of volunteers and volunteering.

More than 1 billion people volunteer globally, the majority of them working in their own countries. Drawing on evidence from countries as diverse as Brazil, Kenya, Lebanon and Bangladesh, the UN report, entitled Transforming Governance, shows how ordinary people are volunteering their time, energies and skills to improve the way they are governed at local, national and global levels.

“Volunteers have a critical role to play in representing the voices of those who are often excluded from development decisions, including women and other groups who may be marginalized,” said UN Development Programme (UNDP) Administrator Helen Clark at the launch of the report in New York today.

The report finds that countries such as Peru, Mozambique and Norway that provide a supportive “enabling environment” for volunteers tend to reap the rewards of their inclusion in decision-making.

But too many others are failing to acknowledge – and leverage – the immense potential of volunteers. Therefore, the study calls on all governments to “go beyond the rhetoric of participation” and take concrete steps to help the world’s volunteers actively contribute to the decisions that affect people’s lives.

Engaging more volunteers in the process of crafting policies and putting them into action would help would be a first step, notes the report. Integrating them into national development frameworks and sustainable development goals (SDGs) strategies would be another, as well as engaging more volunteer women and marginalized groups in local and national decision-making, it concludes. 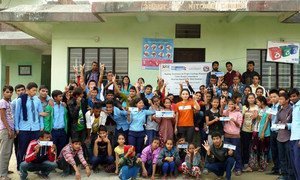 Volunteers are people who act with a spirit of giving, selflessly serving their communities all the while inspiring others to follow by example, United Nations Secretary General Ban Ki-moon said today as the world body marked International Volunteer Day, and paid special tribute to those who have made a difference.