UNSMIL
Participants at the UN-facilitated political dialogue in the city of Skhirat in Morocco in March 2015.
5 June 2015
Peace and Security

The United Nations Support Mission in Libya (UNSMIL) announced today that the next round of Libyan political dialogue sessions in Skhirat, Morocco, will commence on Monday, 8 June.

“The Mission has received thousands of messages from Libyans gravely concerned about the deteriorating conditions in their country,” said a statement released by UNSMIL today.

They are demanding the swift resumption of the dialogue talks and expressed hope that Libyan political actors would seize the opportunity and expedite the dialogue process in order to quickly conclude a political agreement that will bring an end to the conflict in Libya.

The meeting in Skhirat will discuss a new draft of the political agreement based on the latest input of the parties.

UNSMIL is of the firm conviction that this round will be “decisive,” it said.

The Mission is also urging Libyan stakeholders to engage in the forthcoming discussions in a spirit of reconciliation and compromise, as well as a determination to reach a political agreement to bring peace and stability to Libya.

This is a “critical juncture” of the political dialogue process, UNSMIL said, calling on all parties in Libya to shoulder their historic responsibilities to uphold their country’s higher national interest, and reminded them that there can be no military solution to the current conflict in Libya, and there is no other solution outside the political framework.

UNSMIL also commends the efforts of the parties which have given their remarks on the draft political agreement in recent days. UNSMIL has also commended the recent decision by the General National Congress (GNC) in Tripoli to participate in the next round of dialogue. 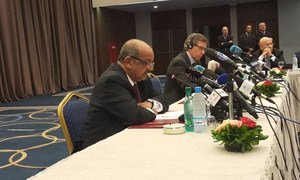 The only option Libya has, “the only real alternative for the future,” is an agreement, Special Representative and head of the United Nations Support Mission in the country (UNSMIL), Bernardino León said at a meeting in Algeria with Libyan political leaders and activists today.