UNICEF/Abdrew Esiebo
A woman and her children in a camp for internally displaced persons, in Yola, the capital of Adamawa, Nigeria, after members of the Boko Haram rebel group attacked their home.

3 June 2015
At a Headquarters forum on the role of media in combating terrorism, senior United Nations officials today expressed deep concerns over the impact of foreign terrorist fighters and their use of social media in spreading propaganda and radicalizing and recruit vulnerable young men and women to join their ranks.

Delivering the keynote address to the Arab League-organized event, UN Under-Secretary-General for Political Affairs Jeffrey Feltman said that violent extremist groups such as the Islamic State of the Levant (ISIL), Al-Shabaab and Boko Haram succeed because they offer young people opportunities to engage with their peers and provide a space where they can bond over their grievances, hopes and deeply held desire for a world that is just and fair.

“We can no longer stand by and watch as this phenomenon spreads. With their message of hate, violent extremists directly assault the legitimacy of the United Nations Charter and the values of peace, justice and human dignity on which that document and international relations are based,” the UN political chief said.

“While governments try to keep up through disseminating more moderate counter-narratives, today’s young people are not looking for moderation – they seek visionary ideas that capture their imagination and offer tangible change,” he added.

Mr. Feltman, who also serves as Chairman of the UN Counter-Terrorism Implementation Task Force and Executive Director of the UN Counter-Terrorism Centre, highlighted how manipulative messages of violent extremists are spread via Twitter, YouTube and other social media, because they are attractive to young people in search of adventure. There are almost 50,000 Twitter accounts supporting ISIL, with an average of 1,000 followers each.

“We need a global, collective and authentic response that engages people to effectively counter and ultimately prevent these destructive, extremist messages that espouse and promote violence and destruction,” Mr. Feltman stressed.

But efforts to combat the spread of extremism must go beyond governments, and extend to religious, youth, women, as well as community, leaders because they are on the front-line to standing up to violent extremists. It is also critical to work closely with media partners to spread stories out about returnees from violent extremist groups and victims of terrorism.

He warned against limits on press freedoms, such as deactivating social media sites or closing newspapers, which at first may appear to suppress the spread of hateful messages, but can end up making violent extremists and their forbidden messages all the more attractive to vulnerable groups.

“Such measures can inadvertently silence activists and other community groups that hold the long-term solutions to preventing violent extremism…we must offer the disenfranchised and disenchanted a real stake in shaping our global world,” Mr. Feltman said.

Also addressing the forum today, Executive Director of the Counter-Terrorism Committee Executive Directorate (CTED) Jean-Paul Laborde, quoted Malcolm X in saying: “The media is the most powerful entity on earth. They have the power to make the innocent guilty and to make the guilty innocent, and that’s power.”

Media has the power to frame narratives, shape public opinion, and inform both politics and policymaking, he said. Media can also legitimize or delegitimize the narratives of terrorists and violent extremist groups. As an example of the magnitude of the problem, between September and December last year, 46,000 Twitter handles supported Da’esh (or ISIL).

“This demonstrates how easily and quickly global recruitment campaigns using social media can be mounted,” he said, highlighting the attack against Charlie Hebdo magazine in Paris this past January and the media blackout allegedly caused by Da’esh on 8 April against the French TV5 network. “What happens if a terrorist group manages to use a network to broadcast beheadings or executions?” he asked.

While freedom of expression and opinion are fundamental rights, they are not absolute, Mr. Laborde stated, citing Articles 19 and 20 of the International Covenant on Civil and Political Rights (ICCPR), which say that the right may be restricted “for the protection of national security or of public order,” and that “any propaganda for war” shall be prohibited by law.

“A careful balance must be struck,” he stressed, pointing out how the Counter-Terrorism Committee has already begun working to establish links with private corporations, civil society, and industries to discuss how to prevent the use of the Internet by terrorists.

Member States may also wish to encourage information and communications technology companies to collaborate with clerics and religious scholars, to curb the impact of online radical narratives by developing mechanisms that counter hate speech and promote tolerance.

“By actively engaging with the media, the international community can provide a narrative based on our core principles to show that we are not just reacting to the terrorist narrative, but also offering a brighter, positive vision for the future of mankind,” he added.

Joining Mr. Feltman and Mr. Laborde today was Ambassador Abdallah Al-Muallimi, Permanent Representative of the Kingdom of Saudi Arabia to the UN and Chairman of the Advisory Board of the UN Counter-Terrorism Centre; Ambassador Raimonda Murmokaite, Permanent Representative of Lithuania to the UN and Chairwoman of the Counter-Terrorism Committee of the United Nations Security Council; Ambassador Haifa Abu Ghazaleh, Assistant-Secretary General of the League of Arab States, and Ambassador Ahmed Fathalla, Ambassador of the League of Arab States to the UN. 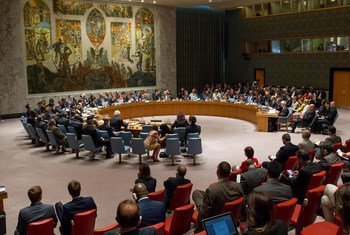 29 May 2015
The increasing number of foreign terrorist fighters populating the front-lines of the world's conflict zones is cause for deepening concern and requires the international community's bolstered efforts to combat the scourge, United Nations Secretary-General Ban Ki-moon declared today as the Security Council renewed its resolve in addressing this growing threat to international peace and security.