UN Electoral Observation Mission in Burundi (MENUB)
Special Envoy for the Great Lakes, Said Djinnit speaks to the press in Bujumbura, Burundi on 29 May 2015.
2 June 2015

The United Nations is continuing its efforts to facilitate a dialogue among Burundian stakeholders amid the country’s ongoing political deadlock and a burgeoning humanitarian crisis, a spokesperson for the Organization announced today.

Briefing a press conference earlier this afternoon, UN Spokesperson Stéphane Dujarric told reporters that the Secretary-General’s Special Envoy for the Great Lakes, Said Djinnit, had returned to the Burundian capital, Bujumbura, after attending the East African Community Summit on Sunday. Mr. Djinnit’s return comes as the UN official seeks to reboot talks with Burundian stakeholders on ways to resume the consultative political dialogue.

The situation escalated shortly thereafter, on 13 May, following an attempted coup d'état as President Nkurunziza left for the Summit of the East African Community, which was intended to try to resolve the crisis.

Mr. Dujarric today reported that Under-Secretary-General for Political Affairs, Jeffrey Feltman, had also recently met with the First Vice-President of Burundi, Prosper Bazombanza, and endorsed the recommendations of the East African Summit which, he said, provided the Government with an additional opportunity to create the conditions for peaceful and credible elections.

Moreover, Mr. Feltman had encouraged the Burundian Government to seize the opportunity to take concrete steps to ensure the security of the electoral process and of political and civil society actors, the disarmament of armed civilians, the strengthening of the national independent electoral commission (CENI), and the vote of refugees, Mr. Dujarric added.

The crisis in Burundi has not only led to growing tensions within the country but has also spawned a troubling humanitarian crisis across the region as thousands of Burundian refugees stream across the country’s borders and into neighbouring states such as Rwanda, Tanzania, and the Democratic Republic of the Congo (DRC).

Since early April, nearly 100,000 Burundians have fled their country, according to UN estimates. At the same time, a cholera epidemic striking refugees gathered along the shores of Lake Tanganyika in Tanzania has only added to the miseries of the unfolding humanitarian crisis.

The UN Spokesperson, meanwhile, reiterated the Organization’s concern about the possibility of an escalation of violence throughout Burundi and reiterated the UN’s calls for calm and restraint while urging Burundians to express their views peacefully.

In addition, Mr. Dujarric noted that Secretary-General Ban Ki-moon had spoken to Presidents Kikwete of Tanzania and dos Santos of Angola by phone yesterday to express appreciation for their leadership in helping address the Burundian crisis.

The Secretary-General reportedly discussed how best the UN, the East African Community and the International Conference on the Great Lakes Region could help defuse tensions and support the holding of peaceful and credible elections in Burundi. 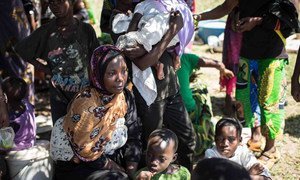 The new head of the United Nations relief arm today released a fresh tranche of crisis funding from the UN Central Emergency Response Fund (CERF) in order to support life-saving relief work for thousands of Burundian refugees dispersed between Rwanda and Tanzania, the Organization has announced.