1 June 2015
While some progress has been made since the first study four years ago spotlighting discrimination and violence against people based on their sexual orientation and gender identity, the overall picture remains one of pervasive, violent abuse, harassment and discrimination affecting lesbian, gay, bisexual, transgender and intersex (LGBT/I) persons in all regions, according to a new United Nations report issued today.

“Violence motivated by homophobia and transphobia is often particularly brutal, and in some instances characterized by levels of cruelty exceeding that of other hate crimes,” according to the report by the UN Human Rights Office (OHCHR) (A/HRC/29/23) to be presented later this month to the UN Human Rights Council, which requested it.

It goes on to say that “there is as yet no dedicated human rights mechanism at the international level that has a systematic and comprehensive approach to the human rights situation of LGBT and intersex persons.”

The report contains 20 recommendations directed at the national governments. Among them:

Repeal laws used to punish individuals based on their sexual orientation and gender identity, including laws that criminalize consensual same-sex relationships cross-dressing, and restrict freedom of expression, association and assembly;

Prohibit discrimination and incitement to hatred and violence against LGBT persons, and enact hate crime laws that punish those who target individuals based on their sexual orientation and gender identity;

The report, the second such official study of its kind since 2011, notes that despite “some progress” during the past four years, “the overall picture remains one of continuing, pervasive, violent abuse, harassment and discrimination affecting LGBT and intersex persons in all regions.”

On killings, the report said: “Data are patchy but, wherever available, suggest alarmingly high rates of homicidal violence” and noted that “terrorist groups may target LGBT persons for punishment, including killings.”

As an example, the reported cited that “in February 2015, photos appeared to show several men, allegedly accused of homosexual acts, being pushed off a tower to their deaths by militants of the so-called Islamic State in Iraq and the Levant (ISIL).”

While noting important recent advances in the protection LGBT people, the report presents evidence of “continuing, pervasive, violent abuse, harassment and discrimination affecting LGBT and intersex persons in all regions.” 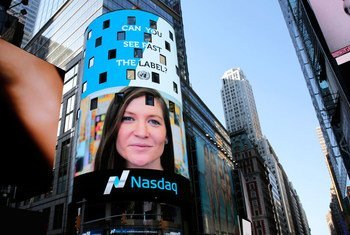 14 May 2015
A new United Nations ‘Free & Equal’ campaign video highlighting the diversity of the lesbian, gay, bisexual, transgender and intersex (LGBTI) community is being shown today on the massive screens in New York’s Times Square ahead of International Day against Homophobia and Transphobia.