UNFPA Cote d’Ivoire
Young people are poised to transform Côte d’Ivoire’s future, but to do so, they must be empowered, educated and employed.
1 June 2015

When young people have decent jobs, political weight, negotiating muscle and real influence in the world, they will create a better future, United Nations Secretary-General Ban Ki-moon said today as he kicked off a Headquarters event on empowering youth through employment.

“A lack of jobs feeds insecurity. A jobs-rich country can have a wealth of stability. Young people are forced to bear the brunt of conflicts. They should be given the chance to carry the banner of peace,” Mr. Ban told the General Assembly.

“The world now has the largest generation of young people in history. I place great hopes in their power to shape our future. They are part of the first generation that can end poverty and the last that can avoid the worst impacts of climate change,” he added.

Today’s High-Level Eventon the Demographic Dividend and Youth Employment essentially takes stock of how countries with large populations of young people and declining fertility rates stand poised to benefit the most from this so-called demographic dividend.

Co-organized by the International Labour Organization (ILO) and the UN Population Fund (UNFPA), today’s event follows last Friday’s General Assembly meeting that marked the 20th anniversary of the World Programme of Action for Youth and will consist of two panel discussions on the demographic dividend and creating opportunities for employment.

“We renewed our commitment to the World Programme of Action,” Mr. Ban said about Friday’s meeting. “And I stressed that we cannot talk about sustainable development without the active involvement of youth.”

This year the United Nations hopes to change the course of human history by adopting the new development agenda at our special summit on sustainable development in New York in September and a universal climate change agreement at conference in Paris this December.

The UN chief, who was joined today by several ministers as well as his Youth Envoy, Ahmad Alhendawi and President of the General Assembly, Sam Kutesa, pointed out that some 74 million people worldwide still cannot find work. The #YouthNow campaign Mr. Ban launched in February and which has generated nearly a billion digital engagements demonstrates the significance of youth issues.

He highlighted the link between development and peace and urged empowering young people to address security matters. It is also critical to invest in young women and adolescent girls who face more obstacles than young men and boys and deserve special support in seizing opportunities and claiming their rights, the Secretary-General said.

To help harness the demographic dividend, Mr. Ban proposed four steps: first, he called for increasing access to family planning and reproductive health care services so that families are able to choose the number and timing of their children. Second, there is a need to ensure that young people get quality education and training to meet the needs of labour markets. Third, there needs to be investments with a focus on human rights and finally, social protection systems must help end poverty and fight persistent inequalities.

“The more young people grow into well-educated adults with fewer dependents and new opportunities to acquire wealth, savings and purchasing power, the more they will be able to accelerate economic growth and development,” he emphasized.

To harness the demographic dividend, right policies and interventions are needed in order to get a higher proportion of the youthful population into economically productive adults. For example, Asia experienced a seven-fold increase in gross domestic product (GDP) per capita by harnessing their demographic dividend, while Latin America experienced a two-fold increase.

Of the 1.8 billion young people worldwide, nine out of 10 of them live in least developed countries, and many in Africa, he added. And the number of young Africans aged 15-24 is set to double by 2045. By harnessing its demographic dividend, the African continent could add up to $500 billion per year to its economy, for as many as 30 years.

“Through vocational training, specialized and practical job-related skills can be developed that prepare young people for work in occupations more in-line with the job market needs,” the General Assembly President said.

Greater investments are required in science, technology, engineering and maths (STEM) to advance innovation. The empowerment of women and girls, particularly in educational opportunities and universal access to quality reproductive health knowledge is also critical.

“The needs of countries with large youth populations should be considered in the context of our sustainable development objectives,” he added, highlighting the need for partnerships between governments, the private sector, and other stakeholders to make the necessary investments in order to empower youth. 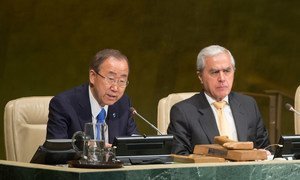 The United Nations General Assembly today commemorated the 20th anniversary of the World Programme of Action for Youth with an acknowledgement that young people have been “disproportionately” affected by many global challenges but “are ready and willing to be actively involved in shaping their future.”