WFP/Abeer Etefa
A reminder of the deadly destruction in the conflict in Mykolaivka in the Donetsk region of eastern Ukraine.
1 June 2015

The report described the casualty figures estimated by the Office of the UN High Commissioner for Human Rights (OHCHR) and the World Health Organization (WHO) as “a conservative estimate” and that the actual numbers could be “considerably higher.”

In a press release on the report, the UN High Commissioner for Human Rights, Zeid Ra'ad al-Hussein said his Office has also documented “alarming reports of summary executions by armed groups” as well as “similar allegations against Ukrainian armed forces.”

“We also have horrific accounts of torture and ill-treatment in detention, both by armed groups and Ukrainian law enforcers,” he said.

The report also states that there has been a notable decrease in indiscriminate shelling after the adoption of the 12 February Package of Measures for the Implementation of the Minsk Agreements, but notes, the shelling has not stopped, nor have armed hostilities between Ukrainian armed forces and armed groups, meaning that civilians continue to live in fear.

“Civilian casualties from landmines and unexploded ordnance are still considerable,” it said.

The report said the vicinity of Donetsk airport and the contested village of Shyrokyne in the Donetsk region remain the “major flashpoints where heavy weapons were intensively used. Reports of sophisticated heavy weaponry and fighters being supplied from the Russian Federation persisted,” the report notes.

“Serious human rights abuses, intimidation and harassment of the local population perpetrated by the armed groups continued to be reported. The [monitoring mission] received new allegations of killings, torture and ill-treatment, as well as cases of illegal deprivation of liberty, forced labour, looting, ransom demands and extortion of money on the territories controlled by the armed groups,” the report said.

The impact of the conflict on the economic and social rights of civilians is dramatic, the report states, adding that “the interruption of access to basic services is life-threatening and can have a life-long impact on a large portion of the population, hindering the post-conflict recovery of the society.” The difficult economic situation has also led to a worrying, increased risk in human trafficking.

High Commissioner Zeid said “millions of ordinary women, men and children in Ukraine have suffered tremendous hardship, violence and have been living in fear for more than a year now” and “too many have had their homes and livelihoods destroyed and their lives torn apart, with no sign of justice, accountability, compensation or redress.”

He urged all parties to seek common ground, through sustained dialogue, to fully implement the 12 February Package of Measures, to end the fighting, and to ensure that all violations of human rights and international humanitarian law are investigated, regardless of the perpetrators.

In late February 2014, the situation in Ukraine transcended what was initially seen as an internal Ukrainian political crisis into violent clashes in parts of the country, later reaching full-scale conflict in the east. Despite a September 2014 cease-fire agreed in Minsk, the situation in Ukraine has since continuously deteriorated, with serious consequences for the country's unity, territorial integrity and stability. In February 2015, the parties in Ukraine and the Trilateral Contact Group signed a “Package of Measures for the Implementation of the Minsk Agreements.” 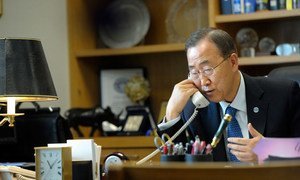 Secretary-General Ban Ki-moon has spoken with Ukrainian President Petro Poroshenko and briefed him on his recent discussions in Moscow, a United Nations spokesperson confirmed today.