In Nepal, UN rushes to replace quake-damaged healthcare facilities ahead of monsoon

WHO/A. Bhatiasevi
Following the second earthquake on 12 May 2015, many patients in hospitals and clinics in Nepal had to leave the building where they were treated. Some said they felt safer outside.
1 June 2015

The United Nations health agency is racing critical medical supplies to fourteen of Nepal's most earthquake-affected districts in an effort to restore health services before the onset of monsoon season.

In a press release issued earlier this morning, the World Health Organization (WHO) confirmed it will be distributing 50 medical camp kits, also known as MCKs, in collaboration with Nepal's Ministry of Health and Population and the World Food Programme (WFP) as part of the UN's continuing on-the-ground relief efforts aimed at patching up the country's beleaguered healthcare networks.

“The MCKs will ensure continuity of care during the rainy season as there is no time to build permanent structures,” Dr. Frank Paulin, the WHO's Acting Representative in Nepal, explained.

“The Foreign Medical Teams (FMTs) have done a wonderful job but there are only a few FMTs in each district, which means that the majority of health posts are nonfunctional and patients must travel long distances to reach facilities,” he added. “The MCKs will therefore improve availability and accessibility of health care.”

In addition, the UN's Office for the Coordination of Humanitarian Affairs (OCHA) has confirmed that 8.1 million people are in need of humanitarian support while another 1.9 million require food assistance.

Nevertheless, among the major obstacles facing emergency responders is Nepal's unique and challenging mountainous topography which has rendered many affected communities difficult to reach. According to OCHA, some 315,000 people in the 14 most affected districts remain in areas inaccessible by road while 75,000 others cannot even be reached by air.

With monsoon season no more than three weeks away, time is now of the essence as affected communities – without shelter and short on food supplies – remain more vulnerable than ever to potential landslides and torrential rains, the UN has warned.

Michel Tomaszek, the WHO's chief in-country logistician, observed that the MCKs being distributed were tailored to the precise needs of affected areas and populations and robust enough to withstand the imminent torrential rains.

Among the main concerns, he said, was the issue of whether or not the land on which they are to be developed is clear and resistant to flooding in the case of sudden downpours. In addition, the locations in which the MCKs are placed must not be areas prone to landslides.

“We have developed these kits from previous relief operations, and with our partners have tailored them to the specific health care needs of the country,” assured Mr. Tomaszek. “We will be able to set them up quickly and soon they will provide both outpatient and inpatient facilities.”

“These camps have been designed with the rainy season in mind, and they will be in use until at least the end of monsoon. This will provide time to rebuild damaged facilities,” he concluded. 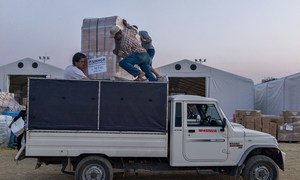 Marking one month after a 7.8 magnitude earthquake struck Nepal killing thousands and devastating large swathes of the country's Kathmandu valley, the United Nations relief arm is continuing to intensify its humanitarian operations as it supports national and local authorities with critical life-saving efforts.