29 May 2015
The increasing number of foreign terrorist fighters populating the front-lines of the world's conflict zones is cause for deepening concern and requires the international community's bolstered efforts to combat the scourge, United Nations Secretary-General Ban Ki-moon declared today as the Security Council renewed its resolve in addressing this growing threat to international peace and security.

Briefing the 15-member Council ahead of the UN body's approval of its Presidential Statement on the issue, Mr. Ban warned that since mid-2014, the flow of foreign terrorist fighters into the ranks of the Islamic State of Iraq and the Levant (ISIL), also known as Da'esh, and other extremist groups, has swelled by 70 per cent.

According to UN monitoring teams, he added, more than 25,000 such fighters from over 100 Member States are estimated to have travelled to Syria and Iraq, as well as Afghanistan, Yemen and Libya.

That is a notable increase in numbers from the last release of such data in November when the Organization observed that over 15,000 fighters from more than 80 countries were flocking to join radical groups.

“I remain concerned that recent events, particularly in Iraq and Syria, which have seen the advance of Da'esh and other groups with the growing support of [foreign terrorist fighters], demonstrate that this is an increasing threat to international peace and security that requires even more concerted action by the international community,” affirmed Mr. Ban.

“No country can tackle this challenge alone,” he continued. “Member States have to enhance their cooperation and exchange information, develop effective border controls and strengthen their criminal justice systems, in accordance with the rule of law and human rights standards.”

As the international community ramps up its efforts to counter the flow of foreign terrorist fighters, however, Member States must remain in full compliance with international law in order to be fully successful with all counter-terrorism efforts, the Secretary-General said. And, in particular, global efforts must also be directed towards address the conditions conducive to luring young men and women to extremism.

The UN has noted that most foreign terrorist fighters are young males aged between 15 and 35 but an increasing number of women and girls have also been joining the ranks of militant groups.

“I welcome this growing emphasis on addressing the underlying drivers of violent extremism at the global, regional, national and local levels to prevent radicalization,” stated Mr. Ban.

The Security Council last met for a debate on terrorism in November when a statement calling on Member States to cooperate in efforts to address the threat posed by foreign terrorist fighters was adopted.

Today, in yet another Presidential Statement, the Council reaffirmed its view of terrorism as “one of the most serious threats to international peace and security” and expressed “great concern” that fighters continue to be recruited “in significant numbers.”

“The Security Council recognizes that addressing the threat posed by foreign terrorist fighters requires comprehensively addressing underlying factors,” the statement announced, adding that that Member States “must ensure that any measures taken to counter terrorism comply with all their obligations under international law.”

In addition, the statement cited concerns for the ramped up usage of social media and communications technologies in recruitment efforts by extremist groups which, it said, appeared to directly target women and youth. 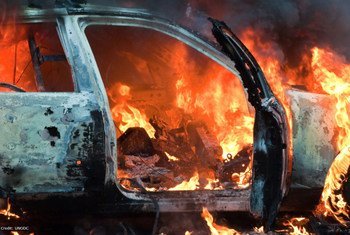 21 May 2015
In the post-September 11th era, youth radicalism is an issue that continues to confound Member States as countless young people enlist in militant groups around the world. But as the world debates the causes of extremism, the UN says comprehensive solutions can be found: through inclusion and progressive youth policies.