‘Use your voices to claim your rights,’ Ban urges university graduates in Belgium

“Use your voices to claim your rights and I will work as your ally,” Mr. Ban

pledged. “Act with passion and compassion. Challenge your leaders, your professors, your presidents, prime minister and CEOs. Tell them you want to be at the negotiation table with them taking part in the decisions affecting your lives.”

“With this honorary degree, you give me another moral mission and I accept this moral mandate and mission as Secretary-General. I know that you ask the United Nations to do much more, and I am committing myself to work for world peace, development, and human rights,” he added.

Speaking at Leuven, Mr. Ban said that this year’s 70th anniversary of the United Nations is a good moment to reflect on the past, but even more importantly, a time to have a conversation about how to build a better future.

“We are also working at a deeper level, trying to nurture new generations of global citizens. Today, around the world, too many millions of children are out of school, and too many others do not get an education that matches the needs of today’s economy,” the UN chief continued.

He highlighted ways Belgium is involved on the global stage and encouraged the European nation to engage further in pushing for the adoption of sustainable development goals (SDGs) in September in New York and adopting a global agreement on climate change in December in Paris.

On migration, he said that what is happening on the European continent and in Southeast Asia, has taken on new urgency with tragic situations in the Mediterranean and Southeast Asia. Migrants are desperately trying to find a better life, but fall prey to perilous journeys, he said.

“I know we have all been saddened to see so many men, women and children lose their lives in the Mediterranean. Our efforts are aimed at saving lives but also resolving the conflicts and poverty that lead people to flee in the first place,” Mr. Ban emphasized.

But the United Nations cannot solve the crises of the world alone. It will need the full support of every citizen in the world.

“We have to shape the future development agenda, which will put us all on a sustainable path, where all the citizens of the world can live peacefully, harmoniously, where their dignity can be respected,” the UN chief said.

In Brussels today, Mr. Ban also met with the President of the European Parliament, Martin Schulz, to welcome Europe’s proposal on migration, including the relocation of 40,000 asylum-seekers, as a step in the right direction. The two leaders also deplored terrorism and pledged to counter the violent extremism.

“This is an opportunity – a historic opportunity – to place the world on more sustainable footing, and I encouraged Belgium to continue doing its part to make this year a great success for the world’s people,” he said. 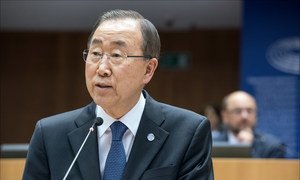 In Brussels today, where he was addressing the European Parliament, the United Nations Secretary-General today the important role played by the European Union in boosting the UN agenda, particularly on matters of peace, development and human rights.