Today, the Greek Cypriot leader, Nicos Anastasiades, and the Turkish Cypriot leader, Mustafa Akinci, took the next steps towards fulfilling their joint vision for a united federal Cyprus, the United Nations Special Adviser of the Secretary-General on Cyprus has confirmed.

“Their constructive dialogue included a range of core issues that go to the very heart of the Cyprus question,” Espen Barth Eide said today in a statement delivered on behalf of the leaders.

“Mr. Akinci and Mr. Anastasiades underlined once again their shared will and determination to reach a comprehensive settlement. The two leaders believe that outcomes at the negotiating table should reflect the positive atmosphere prevailing on the island,” he added.

Mr. Anastasiades and Mr. Akinci agreed that their next meetings will take place on Wednesday, 17 June, Monday, 29 June, Friday, 10 July and Monday, 27 July. In support of the leaders’ mutual commitment, the negotiating teams met five times over the past two weeks.

“They worked tirelessly on all aspects of the Cyprus issue in order to reach a comprehensive understanding of where the two sides currently stand,” Mr. Eide said, adding that progress was achieved in a number of areas.

The leaders agreed to make a strong appeal on the crucial humanitarian issue of missing persons.

Furthermore, as a sign of their mutual commitment, the leaders agreed to the following five concrete steps:

To work towards the opening of more crossing points, starting with Lefka-Aplici and Deryneia. In addition, they referred a number of other proposed crossing points for further examination to the committee on crossings.

They agreed to interconnect electricity grids, and to start taking the practical steps towards this goal.

In the same vein, the leaders agreed on the desirability of mobile telephone interoperability. The two leaders want this issue to be solved. The leaders will therefore instruct the technical committee on economic and commercial matters, as well as their respective experts, to discuss and propose how this important issue can be solved.

In parallel, work will commence to prevent radio frequency interferences.

Last, but not least, the leaders agreed that the Cyprus issue can only be properly solved with due understanding of the perspectives of both women and men. To that effect, they agreed to establish a committee on gender equality.

Mr. Eide said that going forward, the leaders agreed to explore a range of other possible confidence-building measures in parallel to the substantive negotiations. 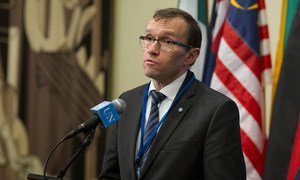