This is 35-year-old Oscar Ouedraogo’s first deployment with a United Nations peacekeeping mission. The native of Burkina Faso has been working as a corrections officer for the UN Multidimensional Integrated Stabilization Mission in the Central African Republic (MINUSCA) since 20 September 2014, in the capital, Bangui.

In his own country, Mr. Ouedraogo, who is from the northern city of Ouahigouya, worked in the corrections administration for eight years, including as Deputy Director of the prison in Ouagadougou, the capital of Burkina Faso, for about two years.

“My desire to work in a peacekeeping operation is the result of my experience in my country,” he explained in an interview with the UN News Centre, a

few days before the celebration of the International Day of United Nations Peacekeeper, observed on 29 May.

“The objective of peacekeeping operations is to help give a smile to people struggling. And I think that when you have the opportunity to live in peace, it is your duty to work to bring that smile, that hope to other people,” he added.

Following several years of crisis, most detention centres in the Central African Republic have been destroyed. Of the 60 prisons that existed before the conflict, only two are now functional. 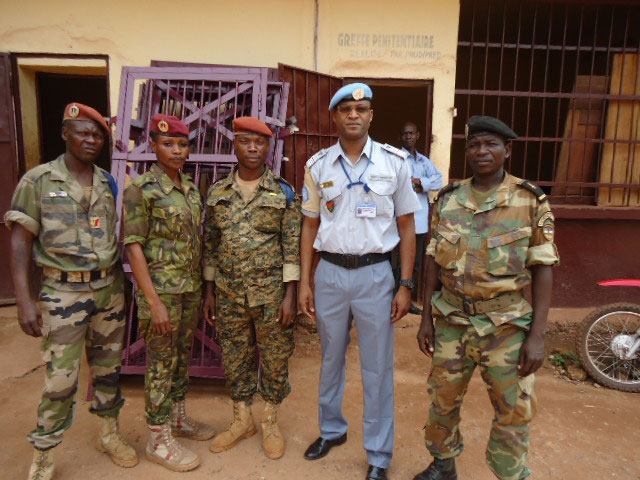 For example, the central prison of Ngaragba, in Bangui, currently houses nearly 700 detainees in a facility that has a capacity of 400.

In addition, the national corrections administration has just under 100 staff members for the whole country. They are not sufficiently trained and equipped and prison security is provided by the military, including the Republican Guard. 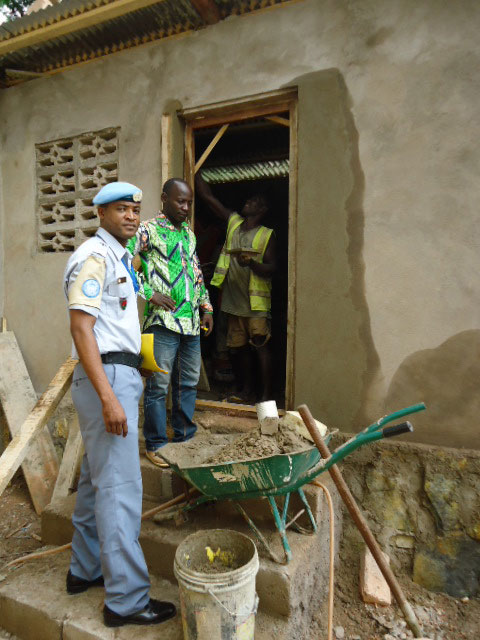 UN Corrections officer Oscar Ouedraogo looking at the progress of the rehabilitation works of the annex of the central prison of Ngaragba in Camp Roux, Bangui, Central African Republic. Photo: MINUSCA

As part of the restoration of the rule of law in the country, MINUSCA is working to develop and implement, in close cooperation with the Central African authorities and its partners, a strategy for the gradual demilitarization of detention centres.

By 2018, the goal is to train 2,000 corrections officers so that the Central African detention centres can be managed by a corps of professionals.

Mr. Ouedraogo works in the human resources team of the Corrections Unit, within the Justice and Corrections Section of MINUSCA. The team is working to create a corps of personnel to manage the Central African corrections system and to promote the ideal corrections officer, one “who knows the rules that must be observed to ensure the most basic rights for the detainees.”

One of the lessons Mr. Ouedraogo learned from his experience in Burkina Faso is that prisons should not be considered as “forgotten” places but centres where detainees can be redressed so they can be reintegrated later in the society where they can be useful.

Hence, the importance of having well-trained prison officers, so that detainees are treated well. “They are human beings who have the right to dignity, who deserve respect,” he insisted.

Beyond what it can do for him professionally, Mr. Ouedraogo believes that working with MINUSCA has been “a truly exhilarating experience” and he has learned a lot. 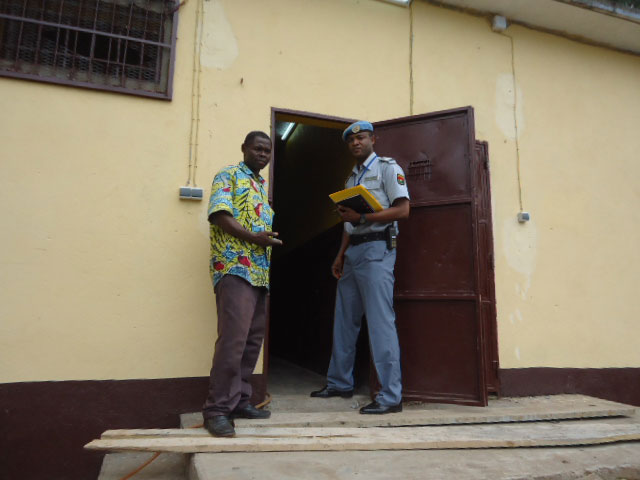 This includes learning to adjust linguistically and culturally in a country where French is one of the official languages, as it is in Burkina Faso.

“It happened to me several times in my interactions with those with whom I work that I cannot be understood well,” he explained. “Over time, I realized that an expression can mean something else depending of the place you come from,” he added.

“For example, when someone says ‘I am not hearing you well,’ it means here ‘I did not catch what you said.’ I used to understand it to mean that the person did not give me the attention I expected,” he said.

Amidst a tentative political transition, the situation in the Central African Republic (CAR) remains tenuous as sectarian tensions continue to simmer and the severity of the country’s humanitarian crisis increases, the top United Nations official in the African country warned today.