UNICEF/ Wathiq Khuzaie
A health worker administers a dose of oral polio vaccine to a boy in the Bajeed Kandala camp in Iraq.
26 May 2015

Aiming to target 5.7 million children under the age of five, the United Nations today launched a mass polio vaccination campaign in Iraq, which is set to be conducted in all governorates to maintain the country's polio-free status.

The last case of polio was reported on 7 April 2014 in a 34-month-old girl from the Rasafa district of Baghdad, according to a joint statement released from the World Health Organization (WHO) and UN Children’s Fund (UNICEF), which are jointly spearheading the initiative.

“Despite the civil unrest that engulfs over a third of the country, polio campaigns have continued to reach up to 90 per cent of children through collaborative efforts with multiple line-ministries and local partners,” WHO’s Country Representative to Iraq Dr. Syed Jaffar Hussain said.

Multiple vaccination rounds held in country since then have helped to protect Iraqi children from the paralysis caused by this incurable disease. Despite ongoing conflict, mass population displacement and a complex and unpredictable security situation, only 2 cases of polio were confirmed in Iraq during the regional outbreak in early 2014.

“Significant risks continue to exist and thus there is no room for complacency,” Dr. Hussain added, appealing to the international community and partners for their continued financial and technical support over the next 12 months for 4 additional nationwide vaccination campaigns.

UNICEF’s Country Representative to Iraq, Phillippe Heffinck, commended the leadership of the Ministries of Health and strong collaboration with partners, such as WHO, that have established community ownership for polio campaigns, and created a strong platform for rolling out strong routine immunization services.

“Both of these achievements are not only remarkable, but essential to keep Iraq polio free and improve the health of all Iraqi children,” Mr. Heffinck said.

In May 2015, a report of the WHO Emergency Committee, convened under the International Health Regulations (IHR 2005), identified Iraq as one of 5 countries removed from the list of ‘states infected with wild poliovirus but not currently exporting.’

The report, however, highlighted that Iraq was still ‘vulnerable to international spread’ and must remain vigilant to ensure all children receive the polio vaccine each time it was offered. Any lapse in routine immunization coverage could again leave Iraqi children vulnerable to preventable diseases.

As of 2015, polio is only endemic in 2 countries of the region – Afghanistan and Pakistan – but this virus can easily make its way into any population in which children are not adequately vaccinated through routine immunization or outreach campaigns. 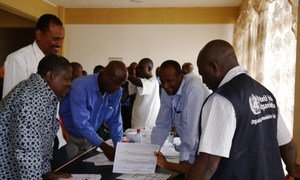 United Nations agencies and their partners today announced a massive campaign to vaccinate more than 600,000 children against polio and measles in Liberia as a crucial step towards recovery and the restoration of health services in the West African country, where Ebola transmissions have dwindled in recent weeks.