UNHCR/B. Loyseau
Burundian refugees being treated for acute diarrhoea in a cholera treatment centre in Kigoma, Tanzania.
26 May 2015

“The reduction in the reported cases is largely due to the concerted approach to contain the spread of the outbreak through intensified measures to promote hygiene,” UNHCR spokesperson Adrian Edwards told reporters at a press briefing in Geneva. “For now the situation is improving, but resolving it fully may take several weeks.”

The Tanzanian cholera epidemic – spawned by a massive influx of Burundian refugees fleeing their country's political unrest – has claimed 30 lives this month alone but as of last Thursday no new cases have been reported, according to UNHCR.

Meanwhile, in all, 4,408 cases have so far been reported with the number of new cases falling to 100 a day from a peak of 915 on 18 May. The deaths have been in the port town of Kigoma on Lake Tanganyika, in the nearby villages of Kagunga and Nyarugusu, and among people being transported by ferry from Kagunga to Kigoma.

Since early April, nearly 100,000 Burundians have fled across the borders, seeking safety in neighbouring Rwanda, Tanzania and the Democratic Republic of the Congo, and the Office of the United Nations High Commissioner for Refugees (UNHCR) has joined with 17 partners to launch the Regional Refugee Response Plan.

With the situation in Burundi remaining tense and with continued violence reported, aid agencies fear that the number of refugees may double over the next six months.

The UN's World Health Organization (WHO) confirmed that the cholera outbreak was, in fact, improving but nonetheless warned that the risk of transmission remained “high due to limited access to shelter, toilets, water and essential medical care.”

In a separate press release issued today, WHO Representative for Tanzania, Dr. Rufaro Chatora, observed that “despite significant improvements, especially at Kagunga, the crisis remains dire.”

“The priority in coming days is stepping up the response including intensifying treatment and prevention of cholera, ensuring adequate supply of medicines and supplies, and improving access to clean water,” he declared.

The prompt response by WHO, UN Agencies, the Ministry of Health and Social Welfare and other partners has greatly contributed to reducing the number of cholera cases, the WHO official added, but the crisis is far from over and significant challenges remain ahead. 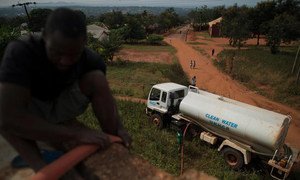 Secretary-General Ban Ki-moon has voiced encouragement at the ongoing political dialogue in Burundi following weeks of tensions and a reportedly failed coup d'état in the country's capital of Bujumbura, according to a United Nations spokesperson.