The vacuum in the post of Lebanon's presidency has undermined the country's ability to address a range of growing security, economic and social challenges, the United Nations Special Coordinator for Lebanon, Sigrid Kaag, warned today.

In a press release marking the one-year point since Lebanon has been without a president, Ms. Kaag observed that the vacuum had contributed to “political polarization at a time when Lebanon must make a united effort to safeguard the country from the impact of the Syrian crisis.”

There has been a presidential vacuum in Lebanon since the term of Michel Sleiman came to an end on 25 May 2014. UN officials and the Security Council have repeatedly urged the Lebanese Parliament to elect a new leader without delay.

The country has also been dealing with renewed terrorist threats and a growing refugee population resulting from the conflict in neighbouring Syria that currently numbers almost 1.2 million.

Urging Lebanon's leaders to adhere to the country's constitution and to the Taef Agreement and National Pact, the UN Special Coordinator called on all stakeholders to put national interests above partisan politics “for the sake of Lebanon's stability and to show the flexibility and sense of urgency needed to resolve this issue.”

“The unified international support shown for Lebanon should be accompanied by meaningful action by Lebanon's leaders,” she declared.

“The presidential election is a Lebanese process, and I call on Members of Parliament to fulfil their constitutional duties, to uphold the country's democratic tradition and convene to elect a President without further delay.” 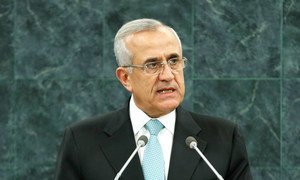 The Security Council voiced its concern at the 10-month stalemate in the election of a president in Lebanon, saying it undermined the country’s ability to address the security, economic and social challenges it faces.