UNHCR/A. Di Loreto
Refugees and migrants risk their lives travelling from Africa to Europe in over-crowded and unseaworthy vessels to escape persecution and violence or simply to find a better life.
25 May 2015

The international community must intensify efforts to provide regular and safe avenues of migration and access to protection, United Nations Secretary-General Ban Ki-moon declared today as he wrapped up his trip to Ireland with a visit to a community of resettled refugees.

Addressing a gathering of people hailing from Afghanistan, the Democratic Republic of the Congo (DRC), Myanmar, Sudan and Syria, Mr. Ban recalled his time as a child during the Korean War when he fled, along with his family, into the hills surrounding his village.

“As we climbed in the rain, I looked back on the only world I knew: where I had played, where I had gone to school, where I had lived with my family; all of it was in flames. Our lives went up in smoke,” he remembered.

“Despite the hardships, despite the darkness, I came through it. Today, I carry a simple message: The world is with you, and I am with you.”

The Secretary-General drew attention to the recent tragedies in the Mediterranean and in Southeast Asia where thousands of migrants and refugees have perished after falling victim to human trafficking as they sought better lives elsewhere.

According to the UN, in the Mediterranean alone, the 1,800 deaths in the first month of the year represent a 20-fold increase over the same period last year – and at this pace, between 10,000 and 20,000 migrants would perish by autumn. About one third of those crossing the Mediterranean are Syrian refugees. Thousands more are from Eritrea, Somalia, Afghanistan and other nations.

In a single weekend in April, 900 people died attempting to cross the Mediterranean.

This “grievous loss of life,” Mr. Ban added, could be prevented through a more accessible and transparent system of migration facilitated by the creation of additional safe and regular avenues and access to protection.

“When we consider how to prevent such tragedies, it is important to think of the individuals who have been forced to flee, and ensure that the response reflects our common values and principles of humanity, solidarity, and respect for human rights,” the Secretary-General continued.

“I welcome the proposals in the European Commission's “Agenda on Migration”, and particularly its focus on saving lives and ensuring the protection of those in need,” he added.

“The United Nations and the UN High Commissioner for Refugees are ready to work with the EU, its Member States and relevant third countries in supporting and further developing the measures included in the Agenda.” 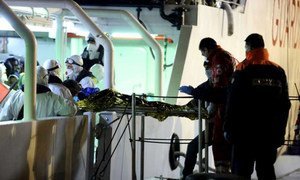 The Mediterranean migrant crisis calls for collective action focused on the immediate need to save lives or else it will represent “a moral failure of the first order,” one that undermines international law and security, a top United Nations migration official warned today.