UNHCR/Brian Sokol
Volunteers load UNHCR relief supplies onto a truck at Tribhuvan International Airport in Kathmandu, Nepal. The aid will be distributed to affected areas across the country.
25 May 2015

Marking one month after a 7.8 magnitude earthquake struck Nepal killing thousands and devastating large swathes of the country's Kathmandu valley, the United Nations relief arm is continuing to intensify its humanitarian operations as it supports national and local authorities with critical life-saving efforts.

“The momentum is there,” said Jamie McGoldrick, the UN Humanitarian Coordinator in Nepal, in a press release issued today. “Considering the conditions and complexities, we are now well-positioned to assist all the affected communities.”

In addition, the UN's Office for the Coordination of Humanitarian Affairs (OCHA) has confirmed that 8.1 million people are in need of humanitarian support while another 1.9 million require food assistance.

Nevertheless, among the major obstacles facing emergency responders is Nepal's unique and challenging mountainous topography which has rendered many affected communities difficult to reach. According to OCHA, some 315,000 people in the 14 most affected districts remain in areas inaccessible by road while 75,000 others cannot even be reached by air.

With monsoon season no more than three weeks away, time is now of the essence as affected communities – without shelter and short on food supplies – remain more vulnerable than ever to potential landslides and torrential rains, the UN has warned.

As a result, OCHA has reported that elite climbers and porters have joined the relief efforts, setting off on foot from humanitarian staging areas where aid is dropped off in order to optimize delivery to the more hard-to-reach areas.

“We don't have much time left to achieve what we set out to accomplish,” Mr. McGoldrick continued. “But with the right support at the right time, we can assist people who desperately need our help, even those in the remote hard-to-reach places.”

Against that backdrop, however, there is also growing concern that international funding for the humanitarian response is, to date, insufficient. In today's press release, OCHA warned that only $92.4 million, or 22 per cent of what is required for the response, was received against the $423 million humanitarian appeal. 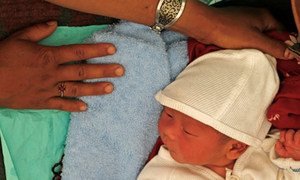 Nepal: UN health agency marks one month since devastating earthquake as it ramps up aid

Nearly one month after a 7.8 magnitude earthquake struck Nepal, flattening large swathes of the country’s Kathmandu valley and affecting millions of people, the United Nations health agency is continuing its emergency response aimed at saving lives and addressing the urgent health needs of the Himalayan nation.