“Today's conflicts are increasingly complex,” the Secretary-General declared in remarks delivered upon receiving the Tipperary International Peace Award in a ceremony in Tipperary, Ireland.

“The lines between terrorists, transnational criminals and extremists are blurring. Civil wars have impacts well beyond their borders,” Mr. Ban continued. “Yet there remains an enormous gap between demands and our capacities.”

Listing the numerous peace and security challenges facing the UN – from Syria to Yemen to South Sudan – the Secretary-General observed that in order to achieve success, the Organization's operations now called for stronger partnerships “based on trust and burden-sharing” while also establishing critical attention on prevention.

“The new sustainable development agenda being shaped by the Member States has a strong preventive dimension, with a focus on building effective institutions of governance,” he confirmed. “Adopting a bold agenda and taking action against climate change can set us on course towards an end of poverty and the beginning of stability for millions.”

At the same time, the myriad security crises and human rights violations afflicting the planet were also stretching the UN's resources thin, he added, noting that all actors – Governments, business and civil society – needed “to join hands as never before.”

However, despite this need, civil society organizations around the world remain “under immense pressure” as military crackdowns, arbitrary arrests and other acts of intimidation sought to limit their ability to help define and tackle human rights issues, said Mr. Ban.

“In accepting the Tipperary International Peace Award, I want to sound a call to protect the space needed by civil society. Confident nations are those that see civil society as an indispensable partner in working for the betterment of society.”

Against that backdrop, the Secretary-General praised Ireland for its role as a “steadfast friend” of the United Nations on issues ranging from peacekeeping to human rights to nuclear non-proliferation.

“It is time for an era of stronger cooperation and action to respond to the millions of people around the world who look to the global body to uphold its obligation to maintain international peace and security,” he concluded. “Ireland's culture of commitment gives me hope.” 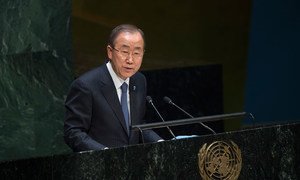