UNHCR/F. Ijazah
A boat survivor rescued by fishermen in East Aceh, Indonesia.
22 May 2015

More than 200 people stranded off the Myanmar coast were brought to shore today, prompting the United Nations refugee agency to welcome the landing and appeal for the rescue of 3,500 others in distress at sea, saying “the priority is to save lives by getting people safely off these boats as soon as possible.”

The Office for the UN High Commissioner for Refugees (UNHCR) said it is working closely with partners to assist the Myanmar Government in ensuring that the needs of the 200 people who were taken to a reception centre – including water, food, medical assistance and protection – are immediately met.

“It’s estimated that up to 2,000 people are still stranded on boats in the Bay of Bengal, and a further 1,500 further to the south in the Andaman Sea area,” UNHCR said in a press release.

“We hope that this recent positive development will be followed by other disembarkations in Myanmar and across the region,” according to the agency. “This needs to happen before the coming monsoon rains. As we have previously emphasized, the priority is to save lives by getting people safely off these boats as soon as possible.”

UNHCR said it has been in discussion with governments about the support it can provide since the announcement on May 20 by Indonesia, Malaysia and Thailand that they would work together to assist people in the region in distress at sea.

The refugee agency said it had already beefed up its response in Indonesia’s Aceh and North Sumatra provinces, where most of the rescues had taken place. More than 1,800 Rohingya and Bangladeshis have arrived since 10 May.

In Malaysia – where over 1,100 people have arrived since 10 May – UNHCR has offered its assistance to the Malaysian authorities and is awaiting a response.

And in Thailand, UNHCR is distributing relief items to recent boat arrivals and others found after their jungle camps were abandoned by smugglers.

Refugee agency spokesperson Adrian Edwards, in response to a question earlier today at the UN press briefing in Geneva, Switzerland, about efforts to arresting the smuggling networks, explained that it was not a country-by-country based problem, but an international issue since those networks were transnational organizations and international criminals that could be defeated only through cooperation. 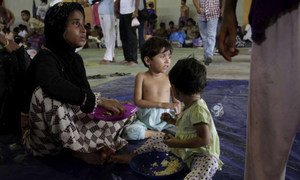 A group of United Nations human rights experts today welcomed the Malaysian, Indonesian and Thai leaders’ decision not to pushback asylum seekers arriving in their territorial waters and urged the international community to assist those countries financially to protect the human rights of all migrants.