UNHCR/D. Mbaoirem
A group of Nigerian refugees rest in the Cameroon town of Mora after fleeing armed Boko Haram attacks.
22 May 2015

In a statement released today, a UN spokesperson said Mr. Ban is appalled by the continued abductions and use of children as so-called “human bombs,” as well as by testimony that many of the girls and women held by Boko Haram are repeatedly raped while in captivity and compelled to marry their captors as part of the group’s ongoing campaign of forced imprisonment and sexual violence.

“The perpetrators of these despicable acts must be brought to justice,” the Secretary-General’s declared in the statement. “He regrets that in spite of the military gains made by the affected countries, Boko Haram continues its wanton destruction and killing of civilians.”

Sexual violence has been regularly employed by Boko Haram as a weapon against female populations. Some 276 girls were abducted by Boko Haram from their school in Chibok, located in Nigeria’s restive north-eastern Borno state, in April 2014, as the militant group ramped up brutal attacks targeting the African country’s children.

At the same time, Mr. Ban voiced deep concern over the further displacement of some 40,000 civilians in Cameroon, Chad, Niger and Nigeria in the last three weeks and urged members of the Lake Chad Basin Commission and Benin “to create a secure environment for the safe and voluntary return, resettlement or integration of displaced persons and refugees.”

In addition, the statement said the Secretary-General urged the States involved in operations against Boko Haram to ensure that all measures taken to address the terrorist threat of Boko Haram are conducted in line with international humanitarian, human rights and refugee law.

“To be remotely effective, the response to this threat has to go beyond a purely military one,” it continued. “Legitimate grievances, past and current human rights violations, and the root causes of the conflict must also be addressed.” 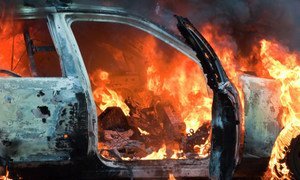 In the post-September 11th era, youth radicalism is an issue that continues to confound Member States as countless young people enlist in militant groups around the world. But as the world debates the causes of extremism, the UN says comprehensive solutions can be found: through inclusion and progressive youth policies.