UNMISS/UN Military
Following the recent upsurge in fighting in Melut, Upper Nile State, South Sudan, UN peacekeepers are protecting displaced civilians on its base and in this area adjacent to the compound.
22 May 2015

The escalation of fighting in South Sudan has resulted in “alarming gross violations” of international human rights and humanitarian law as well as having exacted a terrible toll on the young nation’s civilian population, the United Nations human rights chief confirmed today.

South Sudan’s ongoing conflict began in December 2013 and has been marked by brutal violence against civilians and deepening suffering across the country. Some 119,000 people are sheltered in UN compounds there while the Organization estimates that the number of people in need for 2015 will include an anticipated 1.95 million internally displaced persons (IDPs) and a projected 293,000 refugees.

In a press release, UN High Commissioner for Human Rights Zeid Ra’ad Al Hussein warned that for more than 17 months, millions of people across South Sudan had been “senselessly suffering through an entirely man-made catastrophe” which has robbed more than two million people of their homes and livelihoods and plunged and entire nation into violent instability.

“Over the past few weeks, the opposing parties have actually managed to make a terrible situation much, much worse,” Mr. Zeid declared. “I shudder to imagine how much more the humanitarian situation can worsen with the onset of the rainy season. The unrelenting, indefensible conflict in South Sudan should enrage the conscience of each and every one of us.”

In recent weeks, the fighting in the country has worsened considerably with reports of widespread killings, rapes, abductions and the burning and destruction of towns and villages throughout South Sudan’s Unity state.

In addition, UN human rights monitors have been denied access to various sites in the State by members of the Sudan People’s Liberation Army (SPLM/A) as they sought to verify the reports. Mr. Zeid urged the authorities to allow such access.

“Such persistent impunity has left many with unresolved grievances that are easily mobilized for renewed violence and revenge attacks,” the High Commissioner continued. “The fight against such impunity must be a priority if any peace in South Sudan is to hold.”

Mr. Zeid further warned the parties to the conflict that they must take all feasible measures to prevent harm to civilian lives and infrastructure, including personnel and premises of the United Nations and humanitarian agencies.

Earlier in the week, the UN Secretary-General Ban Ki-moon underscored that the renewed fighting between the SPLM/A and opposition and allied groups is unacceptable – part of a series of violations of the Cessation of Hostilities Agreement signed by the parties on 23 January 2014, and undermines the ongoing Intergovernmental Authority on Development (IGAD) efforts to find a political solution to the conflict.

The Secretary-General called upon President Salva Kiir and former Vice-President Riek Machar to immediately cease all military operations and reminded them of their obligations to protect civilians under international human rights and humanitarian law, after two mortar bombs landed within the compound managed by the UN Mission in South Sudan (UNMISS) on Tuesday. 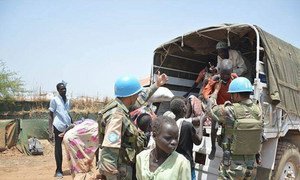 Gravely concerned at the ongoing violence in South Sudan, the Security Council has condemned both the renewed Government-led offensive in Unity state, as well as a recent large-scale attack by opposition forces on the war-torn town of Malakal, threatening to impose sanctions on all those threatening the country’s peace, security and stability.