UN Photo/Evan Schneider
Secretary-General Ban Ki-moon (left) meets with Park Geun-hye, President of the Republic of Korea, in Seoul.
21 May 2015

Secretary-General Ban Ki-moon is today wrapping up his visit to the Republic of Korea (ROK) following a meeting with the country’s president Park Geun-hye and an appeal for greater dialogue across Asia, the United Nations confirmed today.

The Secretary-General met with President Park and her cabinet ministers and senior advisors yesterday to discuss the “critical importance” of making progress on the post-2015 agenda, climate change, development assistance funding, protection of refugees and migrants, and other key global issues, according to a readout released by the UN spokesperson’s office.

In addition, Mr. Ban expressed his “deep regret” regarding the Democratic People’s Republic of Korea’s “unexpected decision” to reverse its invitation for him to visit the Kaesong Industrial Complex – a visit intended for earlier today. Nevertheless, he reiterated that he would “spare no effort” to continue supporting dialogue and reconciliation efforts on the Korean Peninsula.

Moreover, he commended the ROK’s financial and medical assistance toward fighting Ebola in Western Africa while noting the UN’s efforts to improve to continue enhancing global capacity to respond to epidemics. In his meeting with President Park, Mr. Ban also noted that climate change, countering terrorism and violent extremism, and issues pertaining to refugees and migrants would “greatly benefit” from the ROK’s “continued strong commitments and contributions.”

At the same time, the Secretary-General also addressed the Jeju Forum for Peace and Prosperity in a video message in which he said that 2015 presented both “grave threats but also enormous opportunities,” particularly for Asia.

“We are forging a new set of sustainable development goals and aiming for a new, universal agreement on climate change,” he told an audience composed of local officials, dignitaries and members of the ROK’s diplomatic corps.

Pointing to the need for greater dialogue across Asia, especially among the ROK, Japan and China, Mr. Ban added that lasting security in the region would ultimately promote “even greater development.”

“With boldness and creativity, with trust and harmony, Asia can continue to lead the world to a new and better future,” concluded the Secretary-General. 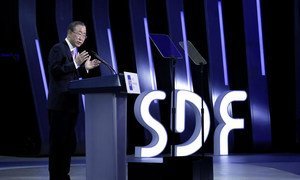