The United Nations Children’s Fund (UNICEF) is rushing critical relief supplies to Tanzania’s north-western border with Burundi amid a devastating cholera outbreak affecting tens of thousands of refugees there.

In a press release issued earlier today, UNICEF confirmed it had dispatched cholera treatment supplies, as well as water, sanitation, health and nutrition items to stem the spread of cholera among 50,000 Burundian refugees living rough along the shores of Lake Tanganyika.

The influx of Burundian refugees into Tanzania has been steadily increasing since the 13th May declaration of a coup d’état against Burundian President Pierre Nkurunziza.

Burundi’s unrest has forced more than 110,000 people to flee to neighbouring countries and the current cholera outbreak has already claimed 27 lives.

“Children constitute more than half of the population on the move and are particularly vulnerable to cholera,” said UNICEF Regional Director for Eastern & Southern Africa, Leila Gharagozloo-Pakkala. “Concerted action by the two counties has fast tracked the dispatch of lifesaving commodities to stem the spread of the outbreak.”

According to the UN agency, overcrowding and poor sanitation has resulted in a surge of confirmed or suspected cases of cholera and acute watery diarrhoea among the refugees. In fact, the number of refugees arriving in the small village of Kagunga has risen sharply – from a population of 10,000 to 90,000 – and the living conditions have become extremely dire. 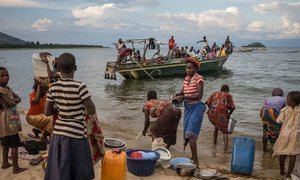 The humanitarian crisis caused by the “escalating political tensions” in Burundi has worsened, according to the United Nations which today reported an uptick in the number of Burundian refugees seeking asylum and a deterioration in health conditions at refugee camps receiving them.