©UNESCO/Ron Van Oers
With militants from the Islamic State of Iraq and the Levant (ISIL) having breached the perimeter of the ancient city of Palmyra in Syria, the UN warns that global cultural diversity is ‘under attack.’
21 May 2015

As the planet’s cultural diversity comes under continued attack from militant groups espousing virulent forms of intolerance, the international community must fight back through openness and acceptance of the world’s myriad traditions, the United Nations cultural agency declared today.

In a statement marking the World Day for Cultural Diversity for Dialogue and Development, Irina Bokova, Director-General of the UN Educational, Scientific and Cultural Organization (UNESCO), reiterated the importance of cultural diversity as humanity’s “shared heritage,” adding that it holds “the promise of renewal and dynamism, and an engine of innovation and development.”

According to Ms. Bokova, however, this promise is under increasing threat. In fact, with conflict engulfing both Syria and Iraq and Islamist extremists fanning across a region rich in archaeological and cultural heritage, the UNESCO chief has increasingly voiced outrage over the practice of cultural cleansing which, she says, risks destroying millennia of history.

Just yesterday, she voiced deep concern over reports that militants from the Islamic State of Iraq and the Levant (ISIL) had breached the perimeter of the ancient city of Palmyra, in Syria, “putting at risk one of the most significant sites in the Middle East and its civilian population.” The extremist group has been blamed for numerous acts of cultural cleansing in Iraq where they reportedly devastated relics at Mosul’s museum of archaeology.

“Today again, cultural diversity is under attack by violent extremists who lay waste to the heritage and persecute minorities,” said Ms. Bokova. “These crimes confirm still further our conviction that the enemies of human dignity will always seek to destroy cultural diversity, because it is the symbol of free thought and the infinite creativity of the human being.”

“It is this link that we must defend,” she continued. “We must respond to all those who seek to proscribe difference and the plurality of ideas, opinions and beliefs by protecting freedom through the wealth of our cultures and creative expressions.”

The World Day for Cultural Diversity for Dialogue and Development, proclaimed by the UN General Assembly in December 2002 and celebrated annually on 21 May, provides an opportunity for mobilization on the part of governments, policy makers, civil society organizations, communities and cultural professionals to promote culture in its diversity and in all its forms, according to UNESCO.

Special attention is given to national cultural policies that recognize the contribution of traditional knowledge, particularly when it to comes to the protection of the environment and the management of natural resources.

For this year’s celebration, UNESCO has urged participants to engage in ten simple activities which, it says, can help boost appreciation for the world’s cultural diversity, including visiting art exhibits and museums devoted to other cultures, engaging in cultural activities from other countries, and experiencing the wealth of diverse religious traditions.

“In a diverse world, the destruction of cultures is a crime, and uniformity is a dead-end: our aim must be to enhance, in one movement, the diversity that enriches us and the human rights that bring us together,” concluded Ms. Bokova.

“This is what the World Day for Cultural Diversity for Dialogue and Development means. It is an opportunity to unleash the creative potential of our different languages and traditions – and to ensure that these differences enrich and strengthen us, instead of dividing us.” 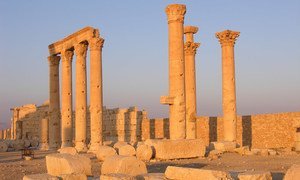