“All of us here today have a great responsibility. Future generations will judge us harshly if we fail to uphold our moral and historical duties in this year of action,” affirmed the Deputy Secretary-General as he spotlighted the importance of charting a new course for global sustainable development.

“Success depends on Governments, companies, investors, educators, scientists, civil society and citizens acting in concert,” he told the meeting, which is being held in connection with the second annual Sustainable Energy for All (SE4All) Forum, which opened Monday in New York and wraps up tomorrow. “Working together, we can light rural clinics, empower local businesses, invigorate economies and protect the environment.”

According to the World Bank's recently released report, Progress Toward Sustainable Energy: Global Tracking Framework 2015, some 1.1 billion people in the world still live without electricity and almost 3 billion still cook using polluting fuels like kerosene, wood, charcoal and dung. And, while picking up steam, renewable energy generation and energy efficiency improvements will need to accelerate dramatically, it says.

Speaking to the gathered delegates, Mr. Eliasson underscored that 2015 would be “a milestone year” for the UN and the international community as it addressed these economic, social and environmental imperatives at three key meetings: in Addis Ababa in July, where UN Member States will work to agree a new forward-looking financing framework for development; in New York in September where they would seek to adopt “a bold universal new post-2015 development agenda” and in Paris in December where they would work to reach a robust universal climate agreement.

“Our aim is – and must be – to bring about transformative change across sectors and across societies,” he added. “We need new approaches that go to the heart of unsustainable production and consumption patterns – across agriculture, industry, infrastructure and transport, and from factories to offices, from homes to market places.”

The Deputy Secretary-General observed that more than 80 developing countries had already joined the SE4All initiative, making commitments worth billions of dollars and taking ambitious actions on the ground. In one particular instance, he said, the UN-backed Zero Routine Flaring by 2030 initiative had brought 18 countries, oil companies and development institutions into the fold to scale up energy efficiency efforts.

At the same time, much remains to be done to help close the remaining gap. According to the World Bank report – which was presented to the opening of the SE4All forum on 18 May – global policy makers must work to triple energy investments from the current level of roughly $400 billion to $1.25 trillion and to adopt modern methods of measuring energy access to replace more traditional measures, such as presence of a household electricity connection, which mask vast differences in the quality of energy services.

“Member States have already indicated that energy will be part of this new generation of development goals,” Mr. Eliasson concluded. “Now we must ensure that means of implementation are equal to the task.”

Against that backdrop, Kandeh Yumkella, the UN Secretary-General’s Special Representative for Sustainable Energy for All and CEO of the SE4All Initiative told delegates that the world had “a trillion dollar” opportunity to accelerate efforts on the sustainable energy revolution.

“It has taken us 20 years to make energy central to the development agenda,” he declared. “The reason we could not discuss energy in an amicable way for nearly two decades is because the politics was not right. It takes politics to change an energy system we’ve been dependent on for over 100 years. It takes strong leadership, real politics to make that happen.”

Mr. Yumkella observed that through a unique combination of politics, public policy awareness, pricing, and public-private partnerships, the international community had managed to develop a narrative of sustainable energy for all.

But, he warned, the time for implementation had now come and Member States would be required to take action at the national and regional level.

“This is not about helping the poor South. This is about an energy revolution. Making sure even the rich use energy different,” the Special Representative asserted to widespread applause. “Because it is the emissions from a handful of countries that will take us to climate hell. It is the poor who will suffer the most if others do not use energy properly.”

Also addressing, Acting President of the General Assembly, Kaha Imnadze, explained that by ensuring access to “affordable, reliable, sustainable, and modern energy for all,” the international community would “greatly contribute” to the world's economic transformation, improving people's livelihoods, addressing climate change and protecting our planet.

“It is essential that governments continue to prioritize energy access, higher energy efficiency and cleaner energy in national development plans and strategies,” he added.

“We need appropriate policy and institutional frameworks to encourage investment in the energy sector and spur further advances in the development of clean-energy technology.” 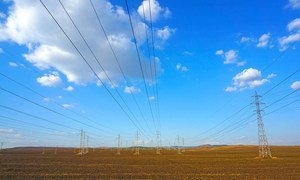 Renewable energy generation and energy efficiency improvements will need to accelerate dramatically if the world is to achieve universal access to sustainable energy by 2030, according to a United Nations-backed report released today as senior leaders from government, business, finance, civil society and global institutions are gathering in New York for the second annual Sustainable Energy for All Forum.