UNMISS
A peacekeeper with the UN Mission in South Sudan (UNMISS).
20 May 2015

The United Nations has strongly condemned the escalation of hostilities in the past ten days between Government and opposition forces in Unity and Upper Nile States in South Sudan.

The United Nations has strongly condemned the escalation of hostilities in the past ten days between Government and opposition forces in Unity and Upper Nile states in South Sudan.

In a statement released by his spokesperson today, UN Secretary-General Ban Ki-moon underscored that the renewed fighting between the Sudan People's Liberation Army (SPLA) and the SPLA in Opposition and allied groups is unacceptable, is part of a series of violations of the Cessation of Hostilities Agreement signed by the parties on 23 January 2014, and undermines the ongoing Intergovernmental Authority on Development (IGAD) efforts to find a political solution to the conflict.

The stateme said Mr. Ban is appalled by the reports of human rights violations committed by the SPLA and their allied forces, including the burning of villages, and the killing and rape of civilians, in the course of their military operations in Unity state.

The Secretary-General called upon President Salva Kiir and former Vice-President Riek Machar to immediately cease all military operations and reminded them of their obligations to protect civilians under international human rights and humanitarian law, after two mortar bombs landed within the UNMISS compound yesterday evening, killing four people.

“He also deplores the death of four internally displaced persons (IDPs) caught in the cross-fire in the protection of civilians site within the UNMISS compound in Melut,” the statement said, reminding the parties of the need to respect the inviolability of UNMISS premises, including protection of civilian sites, which are now host to more than 120,000 IDPs. “He demands that immediate national investigations be conducted so that those responsible for these crimes are held accountable by their respective leadership.”

As well as the four civilian deaths, eight civilians were injured and are currently receiving treatment for their wounds, according to a statement released by the UN Mission (UNMISS), which also expressed deep concern about the disregard for civilian lives, UN personnel and facilities shown by combatants in the fighting.

“I want to remind the parties of their obligation to take all measures not to harm civilians and guarantee the safety of international aid organizations and United Nations personnel and assets,” said Ellen Margrethe Løj, the Special Representative of the UN Secretary General and head of UNMISS. “I call upon them to respect the sanctity of UN installations and staff, so the United Nations can continue to implement its activities and UNMISS its protection of civilians' mandate.”

Until the outbreak of the recent fighting, UNMISS had been protecting almost 1,000 civilians on its base in Melut. A further 270 displaced persons arrived yesterday on the UNMISS base while another 250 to 350 are currently staying in an area adjacent to the compound. 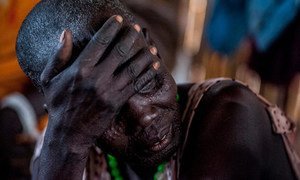 Almost two years since the eruption of the conflict in South Sudan, the situation continues to deteriorate with women and small children making up the majority of most recent casualties, a representative from the United Nations Children’s Fund (UNICEF) in the country said today.