Education is not a privilege but rather a birthright that secures human rights and fights violent extremism, United Nations Secretary-General Ban Ki-moon said today in Incheon, Republic of Korea, as he opened the World Education Forum 2015 which aims to set the roadmap for global education until 2030.

“The terrorists know this. That is why they keep attacking schools, like in Garissa, Kenya and Peshawar, Pakistan. They target girls with books, like Malala Yousafzai and her friends as well as the girls in Chibok, Nigeria,” Mr. Ban told the 1,500 participants gathered at the WEF.

At a press conference later in the day, Mr. Ban announced that he will visit an industrial complex in the Democratic People’s Republic of Korea (DPRK) on Thursday, saying that he hoped the rare trip “will provide positive impetus to further develop it and expand to other areas” to promote inter-Korean relations.

“When I was a child in wartime Korea, we were constantly told to study hard. That was the only way to invest in our future – and it worked,” Mr. Ban said back at the Education Forum.

Studies show that one dollar invested in education can generate up to $15 in economic gain, he said. If all students in low-income countries learned basic reading skills, more than 170 million people could be lifted out of poverty.

The Declaration on Education 2030, the expected outcome of the Forum, aims to mobilize countries to implement the new agenda, and propose ways for its financing. The Forum also sets a new course for education as the United Nations prepares to adopt a bold agenda for sustainable development this September in New York.

“Education must do more than produce individuals who can read, write and count. It must nurture global citizens who can rise to the challenges of the 21st century,” Mr. Ban declared.

Echoing that sentiment, Irina Bokova, Director-General of the UN Educational, Scientific and Cultural Organization (UNESCO) pointed out the power of education to eradicate poverty, transform lives and make breakthroughs on all the proposed sustainable development goals.

“We have the collective duty to empower every child and youth with the right foundations – knowledge, values and skills – to shape the future as responsible global citizens, building on the successes of the past 15 years,” she added.

According to UNESCO’s Institute for Statistics, there were 76 million fewer out-of-school children and adolescents in 2012 than in 2000. During the same period, around 67 million more children received pre-primary education and approximately 50 million more enrolled in primary school.

Joining Mr. Ban and Ms. Bokova was the President of the Republic of Korea, Park Geun-hye, who also spoke at the opening of Forum, which UNESCO is leading in collaboration with the UN Development Programme (UNDP), the UN Population Fund (UNFPA), the Office of the UN High Commissioner for Refugees (UNHCR), the UN Children’s Fund (UNICEF), UN Women and the World Bank Group.

The Forum brings together more than 130 government ministers, along with high-level government officials, Nobel Prize Laureates, heads of international and non-governmental organizations, academics, representatives of the private sector, researchers and other key stakeholders.

This morning, the Secretary-General attended the opening of the 6th Asia Leadership Forum in Seoul, where he spoke about the general situation on the Korean Peninsula. He underscored that the relationship between the two Koreas is critical for lasting peace – not only in the region but globally. And he added that maintaining peace and security in Northeast Asia requires a commitment from all the region’s countries.

Later, Mr. Ban participated in the opening session of the UN Global Compact Korea Leaders’ Summit in Incheon. In his remarks to the gathered business leaders, he congratulated them on their energetic participation in the local global compact business network. But he also encouraged them to do much more, especially in confronting what he called the great issues confronting our planet: poverty, climate change and conflict. 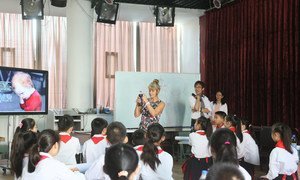 Education programmes in 15 industrialized countries fail to include child rights education in their schools, according to a new United Nations Children’s Fund (UNICEF) report, which also highlights that a fundamental step towards exercising those rights is to know and understand them.