UNHCR
A truckload full of UNHCR aid in Yemen.

19 May 2015
Yemen’s five-day ceasefire aimed at allowing the delivery of critical aid to the country’s beleaguered civilian population did not last long enough for providing the necessary relief, according to the United Nations humanitarian agencies.

“Checkpoints, insecurity and high transport prices make it difficult to move about. Access to basic health care is too far away for many, and transport to expensive,” the spokesperson for the Office of the UN High Commissioner for Refugees (UNHCR), Adrian Edwards, told reporters today at a press briefing in Geneva.

“Scores of children were found to be malnourished, while the accumulation of garbage makes crowded situations worse, raising fears that disease will spread.”

Until its official end on 17 May, the truce greatly facilitated access to areas which had been extremely difficult to reach.

In the first four days of the humanitarian pause, relief workers dispatched enough food aid to cover one month of food needs for more than 273,000 people, delivered fuel to ensure safe water access for 1.2 million people, and transported or distributed enough essential non-food items for nearly 32,000 people. Some 47 metric tonnes of medical supplies were given to hospitals and health facilities in five governorates.

Mr. Edwards acknowledged that the truce had permitted UNHCR to fly in more aid, transport supplies from ports to distribution hubs in the capital, Sana’a, and Aden, and to preposition and distribute aid to displaced people in previously hard-to-reach areas.

But, he added, insecurity, fuel shortages and other logistical challenges had hindered full implementation of the humanitarian plan during the pause and thousands of civilians were still encountering enormous difficulties.

Indeed, health facilities report that since 19 March, some 1,820 people have been killed and 7,330 injured due to the conflict. Casualty figures are likely to be underestimates. Meanwhile, humanitarian partners estimate that more than 545,000 people have been displaced in Yemen since 26 March.

In a press release confirming UNHCR’s concerns, World Food Programme (WFP) Country Director in Yemen Purnima Kashyap explained that although her agency had “raced against time and a volatile situation on the ground,” its relief efforts had only reached half of the intended target.

The WFP had, in fact, dispatched food for more than 400,000 people during the 72-hour pause, and managed to reach areas that were previously inaccessible, but this was only half the 738,000 people it hoped to reach as transporters were reluctant to send their trucks to hotspots, where fighting and shelling continued.

“We are seriously concerned about families out of our reach,” Ms. Kashyap stated. “We need predictable pauses in fighting to allow us to line up partners on the ground to move food and reach the maximum number of people.”

According to the WFP, almost half of the population in Yemen were food-insecure even before the conflict, meaning that around 10 million people did not know where their next meal would come from. The country reportedly imports almost 90 percent of its food from abroad.

The United Nations now estimates that the conflict has pushed many more Yemenis into hunger. 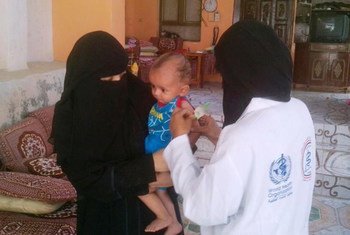 18 May 2015
Stressing that Yemenis have faced “tragic levels of suffering and violence” in recent months, United Nations Secretary-General Ban Ki-moon has called on all sides in the conflict to refrain from any actions that undermine the safety and security of the country’s airports, seaports and transportation infrastructure, and to join consultations without preconditions.