UNHCR
Indonesian fishermen have rescued hundreds of Bangladeshis and Rohingya from Myanmar in May, including these children.
19 May 2015

Several senior United Nations officials have today strongly urged the leaders of Indonesia, Malaysia, and Thailand, to protect migrants and refugees stranded on vessels in the Bay of Bengal and the Andaman Sea, to facilitate safe disembarkation, and to give priority to saving lives, protecting rights, and respecting human dignity.

In a joint statement issued today, the UN High Commissioners for Refugees and for Human Rights, together with the UN Special Representative for International Migration and Development and the Director-General of the International Organization for Migration (IOM) urged regional leaders to work with the Association of South-East Asian Nations (ASEAN) to respond to what they called “grave events” in the Bay of Bengal and Andaman Sea in recent days involving migrants and refugees on boats attempting to move in search of safety and dignity, fleeing persecution, abject poverty, deprivation, discrimination, and abuse.

“Such perilous journeys, whether by land, sea, or air, have become a global phenomenon,” said António Guterres, Zeid Ra’ad Al Hussein, Peter Sutherland and William Lacy Swing, who all signed a statement that noted that 88,000 had tried to migrate by boat in Southeast Asia since 2014. “Nearly 1,000 are believed to have perished at sea due to the precarious conditions of the voyage, and an equal number because of mistreatment and privation at the hands of traffickers and abusive smugglers.”

The joint statement detailed the harsh conditions experienced by migrants and refugees in the Bay of Bengal, where they are fed only white rice and are subjected to violence, including sexual violence.

“Women are raped. Children are separated from their families and abused. Men are beaten and thrown overboard,” the statement said. “We are deeply concerned at reports that boats full of vulnerable women, men and children are unable to land and are stranded at sea without access to urgently needed food, water, and medical assistance.”

The four officials urged States in the region to protect the lives of those migrating on boats by allowing safe disembarkation and they called on States in the region to strengthen Search and Rescue (SAR) Operations, to stop ‘push-backs’ and to uphold the principle of non-refoulement and other fundamental human rights standards.

The statement also contained calls for effective, predictable disembarkation at safe reception locations, for avoidance of the use of detention, for ensuring that human rights – particularly those of children – are protected and prioritized, and for setting in place of screening procedures staffed jointly by Government and relevant international organization personnel to identify the individual circumstances of all those arriving.

More broadly, the statement called on States to expand avenues for safe and legal migration, including for labour migration at all skills levels, to expand efforts to prosecute traffickers and smugglers, to redouble efforts to address the root causes of refugee and migrant flows and to put in place dedicated measures to combat xenophobia and discrimination against any group on the basis of race, sex, language, religion, ethnicity, nationality and national origin, or other status. 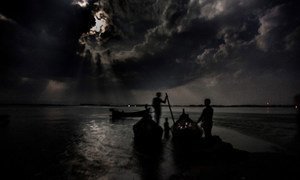 Increasingly concerned about the plight of migrants and refugees stranded in the Andaman Sea and Straits of Malacca, United Nations Secretary-General Ban Ki-moon and UN Deputy Secretary-General Jan Eliasson have spoken separately to leaders in Southeast Asia reiterating the need to protect lives and uphold the obligation of rescue at sea.