With stocks running low and funds running out, United Nations aid agencies are rushing humanitarian assistance to people fleeing the city of Ramadi in central Iraq for the second time this month, according to the UN office tasked with coordinating relief operations.

“Nothing is more important right now than helping the people fleeing Ramadi. They are in trouble and we need to do everything possible to help them,” said Lise Grande, the UN Humanitarian Coordinator in the country. “Thousands of people had to sleep in the open because they didn't have places to stay. We would be able to do much more if we had the funding.”

Almost 25,000 people have fled Ramadi, the capital of Anbar province, following recent attacks by Islamic State in Iraq and the Levant (ISIL), and fierce fighting in the city. Most of the displaced are heading towards Baghdad, with several thousands of families fleeing for the second time in a month.

In response to urgent requests from Iraqi authorities, agencies including the World Food Programme (WFP), the UN Children’s Fund (UNICEF), the World Health Organization (WHO) and the Office of the UN High Commissioner for Refugees (UNHCR) have responded with the WFP distributing food and thousands of immediate response rations in several cities where internally displaced persons (IDPs) are concentrating for safety.

Meanwhile, UNICEF is working with partners to distribute emergency kits, while the WHO has sent mobile health teams and ambulances to areas where the displaced are fleeing and the UNHCR is working to help assess and equip reception areas and temporary camps and UNICEF is providing mobile latrines, showers and hygiene items to IDP camps.

More than 2.5 million displaced persons and refugees are receiving assistance each month from UN agencies and front-line partners. But funding for these life-saving programmes is nearly exhausted. By June, 56 health programmes will be forced to close; the majority in camps and settlements where IDPs are concentrated. In July, the food pipeline will break.

“Abandoning the victims of violence is unthinkable; more has to be done,” Ms. Grande said.

The United Nations will launch a humanitarian appeal for Iraq on 4 June in Brussels. The appeal includes highly prioritized programmes to meet the most urgent needs of vulnerable people in Iraq, including people who have been displaced from Ramadi.

In the last month, UN agencies and non-governmental organizations have provided life-assistance to more than 130,000 people who fled Ramadi following ISIL attacks in April. Tens of thousands of kits and rations have been distributed to more than 35 locations across Anbar Governorate. 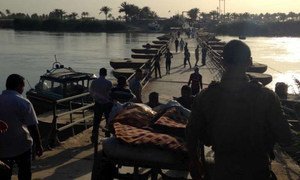 The United Nations refugee agency today warned about the difficulties facing thousands of Iraqi civilians fleeing violence, including dwindling resources, checkpoints, entry restrictions and security procedures to navigate on their journeys to safety.