The top United Nations human rights expert on torture today called for the adoption of the revised Standard Minimum Rules for the Treatment of Prisoners, which are being considered this week by the UN Commission on Crime Prevention and Criminal Justice in Vienna.

The revised Rules contain a number of practical elements that provide detainees with increased protection from torture and other ill-treatment, such as a specific prohibition on the use of prolonged solitary confinement, which is defined as that exceeding 15 days.

“The time is now to adopt the revised Standard Minimum Rules for the Treatment of Prisoners; anything less would send a negative signal to the international community,” Mr. Juan E. Méndez cautioned in anOpen Letter to the UN Commission.

“The adoption and implementation of these rules reinforces human rights principles and provides greater protection for persons deprived of their liberty, updated procedural safeguards, and more effective guidance to national prison administrations,” he explained in a statement issued by the Office of the UN High Commissioner for Human Rights (OHCHR).

The revised Rules also include safeguards such as the recognition of the prohibition of torture and other cruel or degrading treatment, and independent healthcare professionals who have a duty to refrain from participating in torture, and have a role in detecting such ill-treatment.

“Regrettably, there is a lack of guidance on the use of force in the revised Rules which gives rise to the risk that excessive force may be used by prison guards and which, under appropriate circumstances, constitutes cruel, inhuman or degrading treatment,” Mr. Méndez said.

The adoption of a resolution during the 24th session of the Commission on Crime Prevention and Criminal Justice, informally knows as the Crime Commission, will enable the revised Rules to proceed forward and be considered by the UN General Assembly in December 2015.

Juan E. Méndez was appointed by the UN Human Rights Council as the Special Rapporteur on torture and other cruel, inhuman or degrading treatment or punishment in November 2010. He is independent from any government and serves in his individual capacity.

Special Rapporteurs are part of what is known as the Special Procedures of the Human Rights Council, the largest body of independent experts in the UN Human Rights system. They work on a voluntary basis, are not UN staff and do not receive a salary for their work. 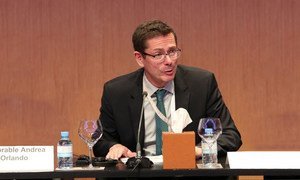 As the 13th United Nations Congress on Crime Prevention and Criminal Justice continued its work in Doha, Qatar today, high-level UN, academic and Government experts at a panel discussion on death penalty advocated moving away from the punishment as there is no empirical evidence that it deters crime.