18 May 2015
The head of the United Nations World Health Organization (WHO) today promised a new $100 million emergency fund and a global health crisis workforce as part of a reform package prompted by the response to the Ebola outbreak in West Africa, saying: “I do not ever again want to see this organization faced with a situation it is not prepared, staffed, funded, or administratively set up to manage.”

“The world was ill-prepared to respond to an outbreak that was so widespread, so severe, so sustained, and so complex,” WHO Director-General Margaret Chan told the 68th session of the World Health Assembly, the top decision-making body of the UN agency that opened today in Geneva, Switzerland.

Noting that “WHO was overwhelmed, as were all other responders,” and the demands on WHO were more than 10 times greater than ever experienced in its almost 70-year history, Dr. Chan proposed making “fundamental changes” to enable her organization to deal with future heath emergencies like Ebola, which has claimed more than 11,000 lives.

“The new programme is designed for speed, flexibility, and rapid impact,” she said. “It reports directly to me, and I am accountable to you. The programme will have performance benchmarks showing what must happen within 24, 48, and 72 hours, not months.”

An independent panel tasked to assess WHO’s response to the Ebola outbreak in West Africa said last week in its first report that the agency “does not have the operational capacity or culture to deliver a full emergency public health response” and urged investments by its member States to make it fit for purpose.

In her opening address, Dr. Chan told the agency’s Member States that while WHO is responding to the devastating earthquakes in Nepal, where it is coordinating the work of more than 150 humanitarian organizations and 130 self-sufficient foreign medical teams, the biggest emergency response is concentrated in West Africa to deal with the Ebola virus.

On a positive note on the Ebola front, she noted that “many appreciated the way WHO moved to unite scientists, the R&D (research and development) community, and the pharmaceutical industry to develop vaccines, medicines, therapies, and rapid diagnostic tests with record-breaking speed.”

Looking ahead, Dr. Chan addressed ways global health has been impacted by a world that has changed dramatically since the start of this century, saying “this is a unique time in history where economic progress is actually increasing threats to health instead of reducing them.”

The WHO chief noted how the “the world population got bigger, more urban, and a lot older, adding dementia to the list of top priorities” and how “unfairness and social injustice were documented in statistics showing the number of forced teenage marriages, the births that never got registered, the estimated 212 million children who are stunted or wasted, and the millions of people driven below the poverty line by the costs of health care they could not live without.”

“Hunger persisted, but the world as a whole got fat,” she said, and “non-communicable diseases overtook infectious diseases as the principal driver of global mortality.”

She also reminded the audience how “more and more first- and second-line antimicrobials failed, raising the spectre of a post-antibiotic era in which common infections will once again kill.”

Dr. Chan also listed a number of areas where global health gains have been made.

Those ranged from that fact that maternal and childhood deaths are falling faster than ever before, with some of the fastest drops recorded in sub-Saharan Africa, AIDS reached a tipping point, when the number of people newly receiving antiretroviral therapy surpassed the number of new infections, to a 47 per cent reduction in mortality in malaria, 37 million lives saved by effective treatment of tuberculosis and the closest ever to polio eradication, she said.

The World Health Assembly, which meets every May, is attended by all 194 WHO Member States, and determines determine the policies of the UN health agency, supervise financial policies, and review and approve the proposed programme budget. 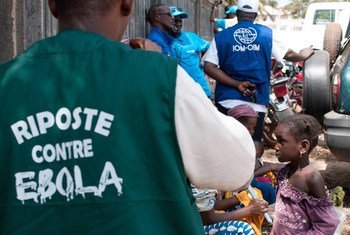 11 May 2015
Independent experts tasked to assess the World Health Organization’s (WHO) response to the Ebola outbreak in West Africa today said “at present, WHO does not have the operational capacity or culture to deliver a full emergency public health response” and urged investments by its member States to make it fit for purpose.