Renewable energy generation and energy efficiency improvements will need to accelerate dramatically if the world is to achieve universal access to sustainable energy by 2030, according to a United Nations-backed report released today as senior leaders from government, business, finance, civil society and global institutions are gathering in New York for the second annual Sustainable Energy for All Forum.

The world is heading in the right direction under the Sustainable Energy for All (SE4All) initiative, the Progress Toward Sustainable Energy: Global Tracking Framework 2015 report says, but it must move faster.

According to the report, some 1.1 billion people in the world still live without electricity and almost 3 billion still cook using polluting fuels like kerosene, wood, charcoal and dung. And, while picking up steam, renewable energy generation and energy efficiency improvements will need to accelerate dramatically, it says.

“We are heading in the right direction to end energy poverty,” said Anita Marangoly George, Senior Director of the World Bank’s Energy and Extractives Global Practice. “But we are still far from the finish line.”

The Forum, which opened today and runs through 21 May, comes at a significant time, building momentum on energy issues ahead of both the September UN summit to adopt the post-2015 development agenda, and the December climate conference in Paris. It will contribute to shaping the direction of energy policy for the crucial decades to come, and catalyse vital investment to help make sustainable energy for all a reality by 2030. 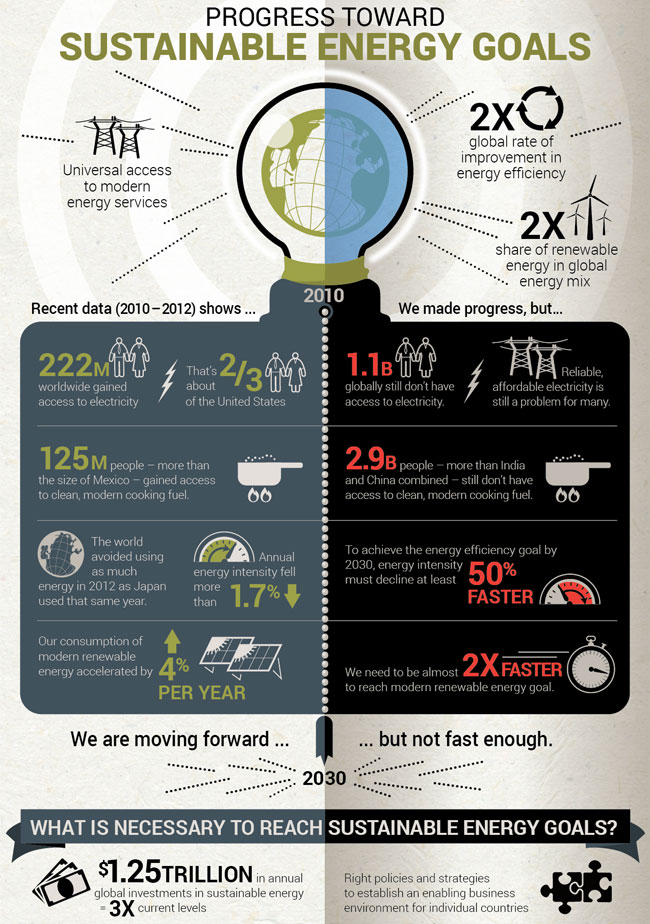 “Energy touches everything. That’s why you’re here,” Kandeh Yumkella, the UN Secretary-General’s Special Representative for Sustainable Energy for All and CEO of the SE4All initiative, told delegates at the opening plenary today. “Our mantra going forward is very simple: converting commitments to kilowatt hours for real people.”

Mr. Yumkella was joined at the opening by Ms. George, as well as Nilda Mesa, Director of the New York City Mayor’s Office of Sustainability; NASDAQ Vice Chairman Sandy Frucher; and Thione Niang, co-founder with R&B artist Akon of Akon Lighting Africa, which is working to provide solar power in more than 10 African countries.

“I grew up trying to beat the sun so I could do my homework before the sun went down,” Mr. Niang said. “We take this fight very personally because we grew up knowing the disadvantages of not having electricity.”

In the report’s tracking period – from 2010 to 2012 – the share of modern renewable energy in the global energy mix grew rapidly at 4 per cent a year, making up 8.8 per cent of total, but to meet the 2030 SE4All objective, the annual growth rate for renewables needs to be closer to 7.5 per cent.

The number of people without access to electricity and the number of people still cooking using polluting fuels like kerosene, wood, charcoal and dung reduced at a faster rate over the two years tracked compared to the previous 20 years, though progress on the latter was slower.

“We will need to work a lot harder especially to mobilize much larger investments in renewable energy and energy efficiency,” said Ms. George. “Leveraging public finance to mobilize private capital is imperative in achieving these goals.”

To help close the gap the report recommends global policy makers work to triple energy investments from the current level of roughly $400 billion to $1.25 trillion and to adopt modern methods of measuring energy access to replace more traditional measures, such as presence of a household electricity connection, which mask vast differences in the quality of energy services.