UNMISS/UN Military
UNMISS Indian Battalion conduct an operation to extract civilians who were stranded during fighting in the Upper Nile State capital Malakal, South Sudan.
18 May 2015

Gravely concerned at the ongoing violence in South Sudan, the Security Council has condemned both the renewed Government-led offensive in Unity state, as well as a recent large-scale attack by opposition forces on the war-torn town of Malakal, threatening to impose sanctions on all those threatening the country’s peace, security and stability.

In a press statement issued over the weekend, the Council condemned renewed and ongoing large-scale violence in Unity state caused by a South Sudanese Government offensive that has displaced more than 100,000 civilians and resulted in the suspension of nearly all aid activity to affected areas – impacting more than 300,000 civilians.

The members of the Council further expressed their condemnation of the large-scale attack initiated on 15 May by the Sudan People’s Liberation Army (SPLM/A) in Opposition on the town of Malakal, in Upper Nile state.

More than 50,000 internally displaced persons have sought shelter and assistance at the UN Mission in South Sudan (UNMISS) camp in Bentiu, and an additional nearly 25,000 at the UNMISS camp in Malakal, only further magnifying a dire humanitarian crisis,” the statement read, calling on all parties to engage meaningfully in the peace process so as to bring about a political solution to the crisis and an end to the conflict.

Against this backdrop, the Council “reiterated its willingness to impose sanctions against those who threaten the peace, security, or stability” of South Sudan as established in resolution 2206 (2015), and noted the 24 March 2015 African Union Peace and Security Council Communiqué, and the 12 May 2015 African Union Commission Chairperson’s Statement on South Sudan.

The Council’s broader concerns were echoed by UNMISS itself, which today said that it is deeply concerned by the fighting that took place in Malakal this weekend following the attack launched by opposition forces on Friday afternoon.

According to a UN spokesperson in New York, UNMISS strongly condemned this new cycle of violence and yet another violation of the cessation of hostility agreement. The Mission is calling on all parties to conclude a comprehensive peace agreement at the earliest, and reiterates that there cannot be a military solution to the conflict.

Relief workers report that in Malakal, armed groups have engaged in combat next to the UN civilian protection site and, as a consequence, civilians trying to stay out of harm’s way have been injured.

The Humanitarian Coordinator for South Sudan, Toby Lanzer, warned that military operations in Unity and Upper Nile states over the past three days have again devastated countless lives. Eyewitness accounts report targeted rape and killing of civilians, including children.

The offensive in Unity state has left thousands of homes burnt and Leer hospital is again under threat of destruction.

UN agencies and their partners are working to address the immense humanitarian consequences of the violence, which has resulted in more than 650,000 civilians being left without life-saving aid.

In the coming days, humanitarian staff plan to travel to Leer and Malakal to assess the humanitarian situation, the spokesperson added. 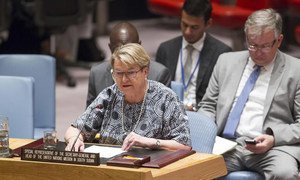 The security situation in South Sudan deteriorated further during late April and early May, the head of the United Nations mission in the country warned today as she briefed the Security Council on the “very worrying” developments that have had a devastating effect on civilians.