In a commencement address at Georgetown University, where he received an honorary degree today, United Nations Secretary-General Ban Ki-moon told graduates to choose service, be bold, listen, champion progress and act with passion and compassion.

“Make the choice of service. There are many paths, including the one I chose: public service. What is important to remember is that history does not measure a person by his or her bank account. What counts is how much one gives back to the world,” Mr. Ban said in Washington, D.C., earlier today.

In its 70 year history, the United Nations has helped end wars and start progress in places where nearly all hope was lost. While the Organization has protected millions of people, repression continues. The ozone layer may have been saved but the threat of climate change looms.

“You have reached a pivotal moment in your lives. Our world is also at a crossroads,” he added.

Today, the world faces multiple tragic crises, from Syria to Yemen to South Sudan. There are more refugees ¬– 50 million – than at any time since the end of the Second World War. Inequality is growing. Extremism is spreading, the Secretary-General explained.

When individuals serve others, they enrich themselves. When countries serve the global interest, they advance their own security.

“Thank you for this honorary degree. I humbly accept on behalf of the dedicated United Nations staff around the world who risk their lives for peace, development and human rights. This honour is for them,” Mr. Ban said.

“When I became UN Secretary-General, there were new issues to confront – including human rights for all people regardless of sexual orientation or gender identity,” he remembered.

While some may have wanted the UN chief to be quiet, he felt obliged to speak out because lives were at stake, he said.

“I stood with the LGBT members of the human family – and today same-sex partners at the United Nations enjoy equal rights. This year, the United Nations is working to champion progress across our agenda of peace, development and human rights,” he said.

In September, the United Nations will adopt a new sustainable development agenda to end poverty. In December, governments have promised to finally reach an ambitious agreement on climate change.

His biggest piece of advice to graduates: “Listen – listen most of all, to opposing views. In my time as Secretary-General, I have seen too many leaders turn a deaf ear to the voices and dreams of their people. It is as though they rule with noise-cancelling headphones.”

But listening is not just for leaders, Mr. Ban continued, it is just as important for average citizens to turn to each other with open minds and open ears. Yet, he feared that people are increasingly reluctant to hear dissonant voices.

Too many communities rush to point out an affront against them, but ignore the legitimate grievances of others, Mr. Ban said, urging the international community to close the 'empathy gap' that is so prevalent in our world today. “This is not an age for worlds of one. We must be one world – One world,” declared the UN chief.

“Today you receive your Georgetown diploma – one of the greatest accomplishments a young person can earn. You should be proud,” the Secretary-General concluded. 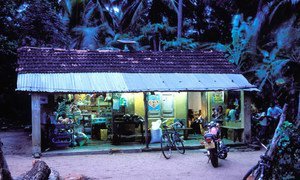