WHO/A. Bhatiasevi
Following the second earthquake on 12 May 2015, many patients in hospitals and clinics in Nepal had to leave the building where they were treated. Some said they felt safer outside.
15 May 2015

Over the past three weeks, the lives of eight million Nepalese people has been “changed beyond recognition,” Secretary-General Ban Ki-moon told the United Nations General Assembly today, as he called on the international community to rally in support of the country and invest for the long haul so that it can sustain itself as it recovers and rebuilds from a devastating earthquake.

During a special Assembly session that saw the adoption of a resolution on ‘Strengthening emergency relief, rehabilitation and reconstruction in response to the devastating effects of the earthquake’, Mr. Ban expressed condolences to everyone who lost a family, friend or loved one during the massive 7.8 magnitude quake that struck Nepal on 25 April, killing more than 8,200. Another powerful temblor shook the country this past Tuesday, killing dozens more and dealing another blow to Nepal’s severely crippled infrastructure.

Through their consensus resolution, Member States requested the Secretary-General and the wider UN system to continue to assist Nepal in ensuring effective coordination of the national and international relief, and reconstruction efforts. Under the terms of the text, the 193-member body also emphasized the importance of linking relief with rehabilitation and development from very early on, of building resilience and “building back better.”

“Emergency relief is never enough,” said Mr. Ban as he took to the podium before Member States adopted the resolution.

“People must also be able to sustain their livelihoods. Efforts to stimulate small and medium enterprises will have long-reaching benefits. Nepal has been torn apart, years of development gains destroyed. Basic social services, in particular healthcare and education, have been interrupted. Tourism and communication have all suffered highly,” he added.

The Nepal Earthquake Flash Appeal launched by the UN Office for the Coordination of Humanitarian Affairs (OCHA) stands at $423 million to support people through immediate lifesaving aid operations. But the appeal is currently only 14 per cent funded, Mr. Ban pointed out.

“Three weeks since the earthquake, humanitarian operations are intensifying and relief goods are entering the country more quickly. Humanitarian agencies are relying on the local communities and are using every means possible to reach communities that are cut off from transformation networks,” he emphasized.

Hundreds of thousands of people were left homeless and countless more without food, water, and healthcare. Some of the hard-hit villages are in the toughest to reach areas. Since the quake hit, more than a million people have been reached with food. Emergency health teams are present across the country.

“Humanitarian aid is making a difference but we need to do more with the monsoon season starting in June more than half a million people must have emergency shelter before the heavy rain starts,” Mr. Ban said.

Making sure aid is delivered is especially critical now as monsoon season approaches. It is also currently planting season and next year’s harvest will be severely affected unless farmers can plant their seeds now. But some areas of Nepal has lost all their water and sanitation facilities.

“I cannot stress enough the importance of getting aid and clean water supplies to everyone in need over the next few weeks,” Mr. Ban said, pointing out that discussions between the Nepalese Government, European Union, development banks and United Nations are already underway.

Echoing that sentiment, acting Vice-President of the General Assembly, Kaha Imnadze, speaking on behalf of General Assembly President Sam Kutesa stressed that access to health care, sanitation and hygiene services are critical priorities that must be addressed.

“As we have learned from similar natural disasters, increases in mortality, morbidity and outbreaks of communicable diseases can be prevented through access to basic health care and clean water,” he added.

“Beyond the needs of urban centres, people displaced from rural villages need to be able to return to their homes before the start of the planting season. Failing to enable people to return to their respective villages to plant crops could have severe consequences for the country’s food security,” Mr. Imnadze emphasized.

In coordinating relief efforts, it is important to bear in mind there is only a “small window of opportunity” to assist affected communities.

“With the monsoon season set to start in June, it is of utmost important that a comprehensive relief effort is launched as quickly and efficiently as possible,” he added. 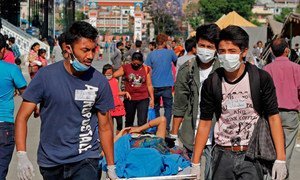 The emergency preparedness efforts implemented by the Government of Nepal over the past 15 years have ensured that key elements of the health sector remained ready and able to function during the recent earthquake that devastated large swathes of the mountainous country, the United Nations World Health Organization (WHO) said today.