UNHCR/F. Scoppa
Burundians fleeing pre-election violence rest on the shores of Lake Tanganyika in the Democratic Republic of Congo after a gruelling 22-hour boat journey. More than 100,000 Burundians have fled over the past month, arriving in Tanzania, Rwanda and the DRC.
15 May 2015

The United Nations human rights chief has voiced concern over the developments in Burundi over the past two days following a reportedly failed coup d’état in the country’s capital and urged all armed forces and non-state actors to refrain from actions that may endanger civilians.

“I am deeply worried by the extremely tense situation in Burundi. We are receiving alarming messages from human rights defenders and journalists fearing for their safety,” UN High Commissioner for Human Rights Zeid Ra’ad Al Hussein declared in a press release issued this afternoon.

“I urge the Burundian authorities to ensure their protection and to guarantee that there will be no unlawful reprisals following Wednesday's failed coup.”

The attempted coup d’état in the Burundian capital, Bujumbura, was set in motion on 13 May after President Pierre Nkurunziza left for the Summit of the East African Community with hopes of resolving the country's long-running political crisis.

Tensions have been running high in Burundi since popular protests erupted after the country’s ruling National Council for the Defence of Democracy – Forces for the Defence of Democracy (CNDD-FDD) party nominated on 26 April Mr. Nkurunziza as its presidential candidate for a third term. The ensuing violence has sent thousands of people fleeing to neighbouring countries, according to the UN.

Amid reports that Mr. Nkurunziza had regained control of his Government earlier today, Mr. Zeid urged all sides to “refrain from taking violent actions” and to pay “special attention” to the protection of civilians in what he described as a “highly violent context.”

“In light of the calls made by the civil society to restart the demonstrations in Bujumbura, I urge the Burundian authorities to ensure that security forces comply fully with the country's international human rights obligations and international standards on policing demonstrations,” Mr. Zeid continued.

“Those who incite or engage in acts of mass violence should be aware that they are liable to be prosecuted by competent judicial bodies, as reflected in the recent statement by the Chief Prosecutor of the International Criminal Court,” the High Commissioner warned.

Mr. Zeid’s appeal comes on the heels of Secretary-General Ban Ki-moon’s statement yesterday in which he similarly urged all political and security leaders to clearly and openly reject the use of violence, refrain from acts of revenge, and rein in their militants.

Earlier this morning, Mr. Ban spoke with President Uhuru Kenyatta of Kenya about the situation in Burundi and emphasized the need for leaders in the region to join efforts to help resolve the crisis in the country. The Secretary-General plans to speak to President Nkurunziza and other leaders in the coming days, according to a UN spokesperson.

Against that backdrop, the humanitarian crisis spawned by the political instability and insecurity in Burundi has also prompted widespread concern across the UN system as thousands of Burundian refugees spill over into neighbouring countries.

Mr. Zeid voiced concerns that the political instability and reports of intimidation of civilians could result in an even greater humanitarian crisis amid “a significant increase” of refugees fleeing Burundi and reports of rapidly deteriorating sanitary conditions in some locations where large numbers of refugees have gathered, such as Kagunga, a border village on the shore of Lake Tanganyika in Tanzania.

To that point, the UN refugee agency (UNHCR) has noted that over 105,000 people have now fled the country, with 70,187 in neighbouring Tanzania, 26,300 in Rwanda and 9,183 to the province of South Kivu in the Democratic Republic of the Congo.

Speaking to a news conference, UNHCR spokesperson Karin de Gruijl added that the number of arrivals in Tanzania had risen sharply in recent days, with authorities reporting that over 50,000 Burundians are living rough in Kagunga.

“With the rapidly increasing number of people arriving in Kagunga, the living conditions have become extremely dire. People managed to bring some food and can fish in the lake, but the lack of clean drinking water, latrines and shelter is acute,” Ms. de Gruijl told reporters. “The local health services in the village are overwhelmed.”

She added that UNHCR is currently on the ground setting up a reception centre to address the most urgent needs and also fast-tracking the transfer of pregnant women, children, elderly and sick refugees to neighbouring Kigoma.

In addition, seventeen trucks carrying thousands of tents, plastic sheeting, mosquito nets, blankets, kitchen sets, jerry cans, solar lamps and other basic relief items from UNHCR regional warehouses are expected to arrive in Kigoma on 17 May, as UNHCR and its partners gear up for a large-scale refugee emergency. More than 18,000 refugees have been moved to the refugee camp so far. 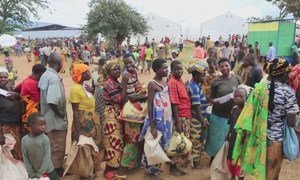 Calling urgently for calm and restraint in Burundi, United Nations Secretary-General Ban Ki-moon today condemned all attempts to oust elected governments by military force and appealed to the country’s political and security leaders to “clearly and openly reject the use of violence, refrain from acts of revenge, and rein in their militants.”