WFP
WFP is working to assist tens of thousands of refugees from Burundi who have fled into neighbouring DRC, Rwanda and Tanzania to escape the ongoing political crisis.
14 May 2015

Calling urgently for calm and restraint in Burundi, United Nations Secretary-General Ban Ki-moon today condemned all attempts to oust elected governments by military force and appealed to the country’s political and security leaders to “clearly and openly reject the use of violence, refrain from acts of revenge, and rein in their militants.”

“The Secretary-General is gravely concerned by developments in Burundi since the announcement of the electoral candidacy of President [Pierre] Nkurunziza, and especially in the aftermath of the 13 May declaration of a coup d'état,” according to a statement issued today by Mr. Ban’s spokesperson in New York.

A Flash Update issued yesterday by the UN Office for the Coordination of Humanitarian Affairs (OCHA) said that a coup d'état had reportedly taken place in the Burundian capital, Bujumbura, after President Nkurunziza left for the Summit of the East African Community, which was intended to try to resolve the crisis.

In his statement today, the Secretary-General condemned “attempts to oust elected governments by military force,” and he appealed for strict respect of Burundi's Constitution as well as the UN-backed Arusha Agreement.

“The Secretary-General now urgently calls for calm and restraint,” the statement continued, underscoring Mr. Ban’s urgent call on all political and security leaders to clearly and openly reject the use of violence, refrain from acts of revenge, and rein in their militants.

He also stressed that anyone responsible for ordering or committing human rights violations will be held accountable. “In this regard, he has full confidence that the Security Council will consider the various tools at its disposal in examining the situation in Burundi, including regarding accountability,” the statement added.

“The United Nations reminds the Burundian authorities of their obligation to ensure the protection of all Burundian citizens, as well as United Nations personnel and premises,” it said, noting that the Secretary-General commends the East African Community (EAC) for its leadership.

According to the statement, Mr. Ban is in close contact with leaders in the region, and through his Special Envoy for the Great Lakes, Said Djinnit, the UN will continue to work closely with the EAC, the African Union and other partners in joint efforts to help resolve the crisis in Burundi.

“He also urges Burundians to create the conditions for the holding of inclusive, violence free and credible elections, as soon as possible,” the statement concludes.

Meanwhile, UN relief agencies today agreed to develop a regional response plan to deal with the exodus of refugees fleeing Burundi to neighbouring countries, as the situation in the crisis-gripped east African nation continues to deteriorate weeks after election-related political tensions and violence erupted.

Regional Representatives from the UN Office for the Coordination of Humanitarian Affairs (OCHA), Office of the UN High Commissioner for Refugees (UNHCR), UN Children’s Fund (UNICEF) and the World Food Programme (WFP) reached the agreement during a two-day inter-agency consultation in Nairobi, Kenya that concluded today.

The plan will be finalized before the end of May and cover an initial period of six months starting 1 April 2015, the date when refugee flows started. Some 55,000 asylum seekers from Burundi have sought refuge in neighbouring Rwanda, Tanzania and the Democratic Republic of Congo (DRC) countries over the past six weeks and those numbers are expected to rapidly rise.

Explaining the consultative process to donors Stefano Severe, Regional Refugee Coordinator for the Great Lakes Refugee Situation and UNHCR's Regional Representative in the DRC said that UNHCR has been monitoring developments in the Great Lakes Region, particularly population movements and forced displacement linked to scenarios in eastern DRC and Burundi.

He added that he had met with Special Envoy Djinnit to explore synergies between the political and peacebuilding initiatives carried out by and on behalf of the Secretary-General. The Regional Refugee Coordinator commended UN and non-governmental organization partners' ongoing efforts to protect and assist persons affected by the Burundi crisis.

"While focusing on emergency response, I would like to reiterate the primacy of protection, the importance of placing ‘Human Rights Up Front’ and of including durable solutions in our responses," Mr. Severe said, adding that the emergency response an include support to early recovery as a lifesaving measure as emphasized by the Inter-Agency Standing Committee (IASC), the World Bank and the UN Development Programme (UNDP).

Regional partners will be looking to harmonize approaches, planning scenarios and projections of refugee numbers as well as priority actions and minimum standards of response across the affected countries. The Burundi population is highly vulnerable, and with escalating prices of basic commodities in the country, the imperative of quick effective responses to their needs cannot be overstated. 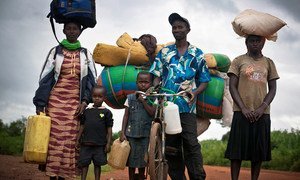 Amid reports of political upheaval in Burundi, United Nations Secretary-General Ban Ki-moon called urgently today on all parties in the country to exercise calm and restraint, and reminded the country's leaders of the need to preserve peace and stability.