Malia Hurwitz
Ahead of the International Day against Homophobia & Transphobia, UN Free & Equal campaign launches new video celebrating contributions of lesbian, gay, bisexual, transgender and intersex people to communities around the world.
14 May 2015

A new United Nations ‘Free & Equal’ campaign video highlighting the diversity of the lesbian, gay, bisexual, transgender and intersex (LGBTI) community is being shown today on the massive screens in New York’s Times Square ahead of International Day against Homophobia and Transphobia.

The cast features real people filmed in their workplaces and homes – among them, a firefighter, a police officer, a teacher, an electrician, a doctor, a volunteer and two same sex parents. UN Secretary-General Ban Ki-moon also makes an appearance in the video’s final scene, helping to underscore the UN’s appeal for allies to join the push for greater acceptance and equality for LGBT people everywhere. The singer Sara Bareilles lent her support to the project by granting permission for her iconic song Brave to be used for the video’s soundtrack.

“Lesbian, gay, bisexual, transgender and intersex people are now reaching new frontiers and celebrating remarkable achievements. Despite this transformation, acts of discrimination and violence continue against the LGBTI community,” said Michel Sidibé, Executive Director of the Joint UN Programme on HIV/AIDS (UNAIDS) in a video message to mark the International Day. 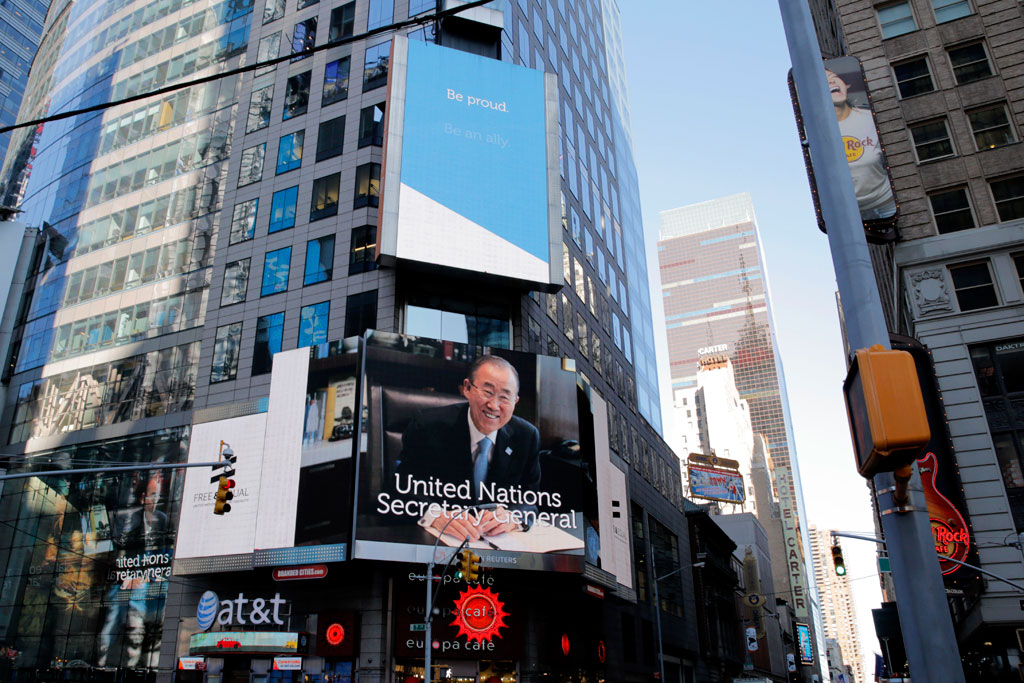 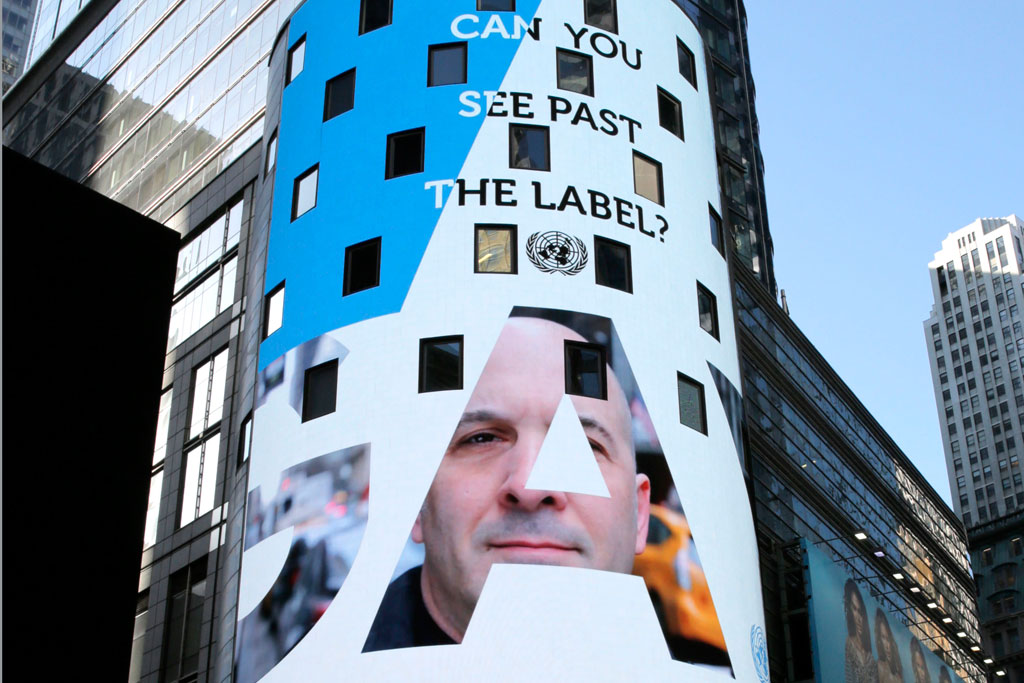 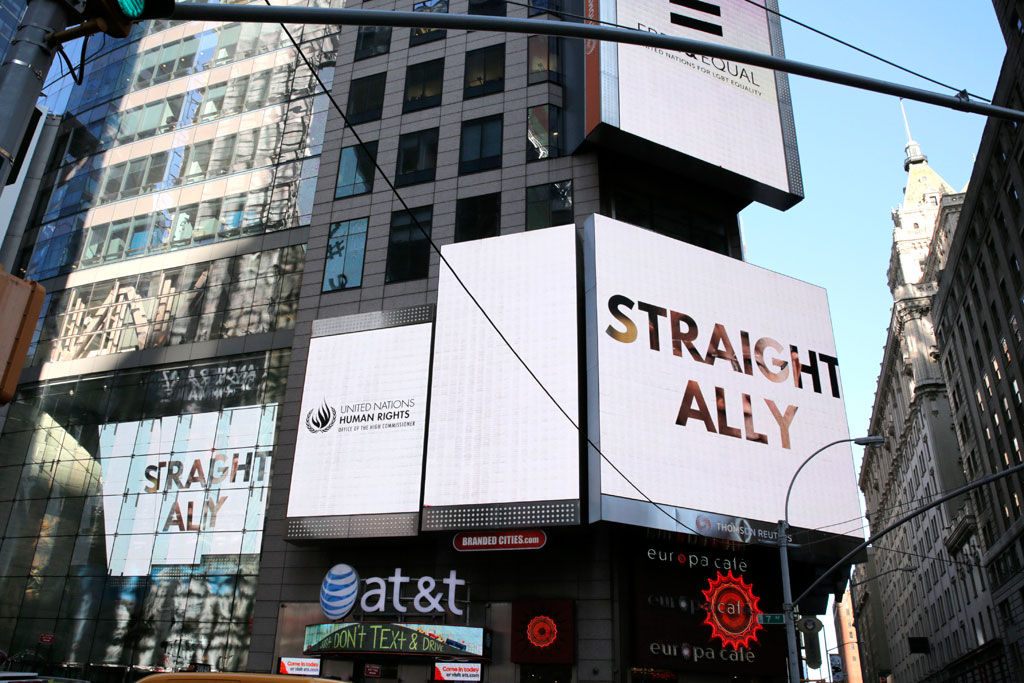 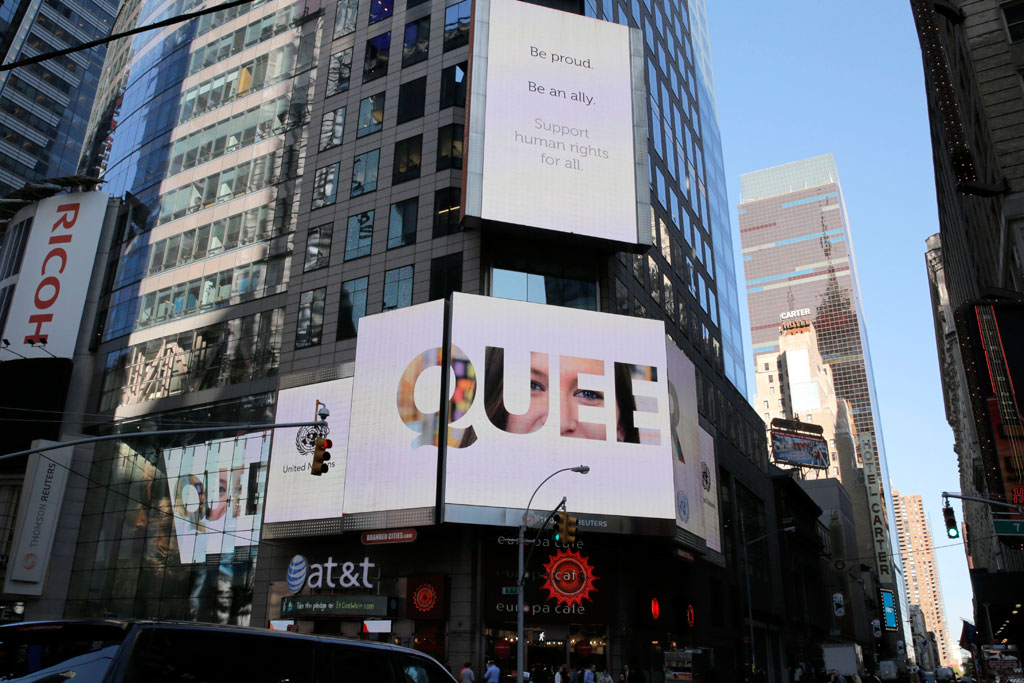 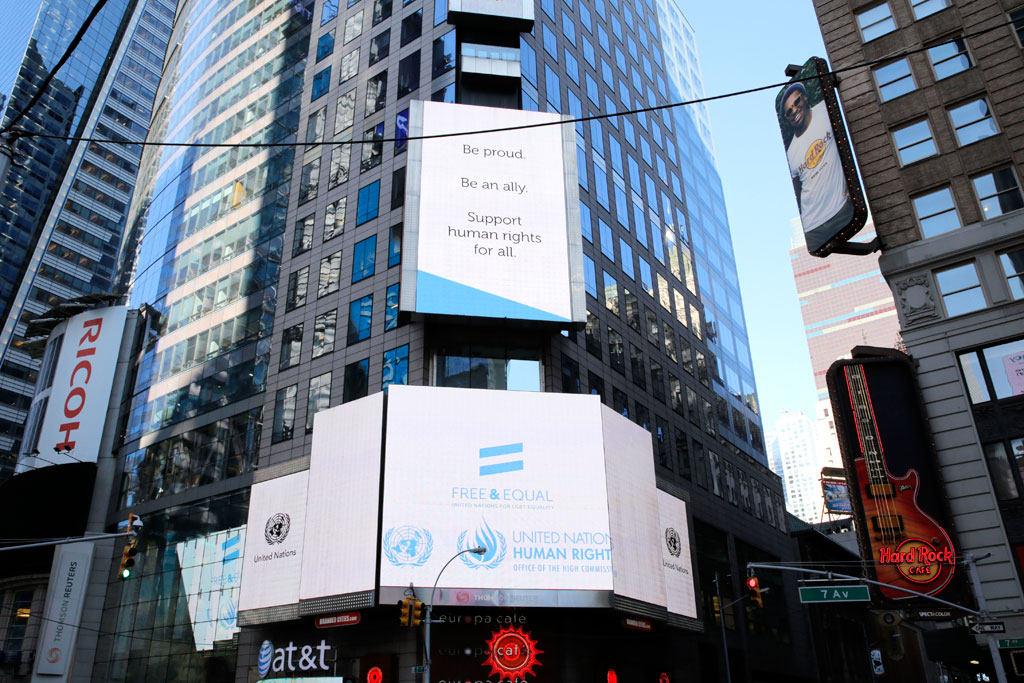 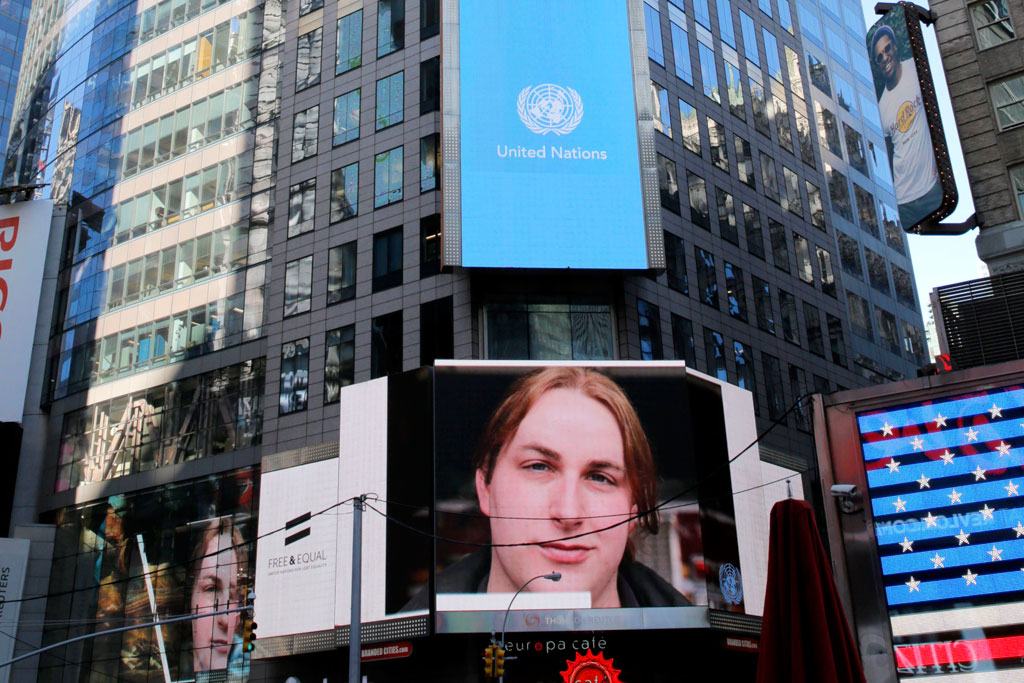 “We cannot tolerate picking and choosing rights in a modern society – a society where diversity is celebrated; a society where everyone, no matter where they live or whom they love, is able to live in peace and security; a society where everyone can contribute to the health and well-being of their community,” he added, calling on everyone to join the movement for social justice, equality and equity, so that all people can live with respect and dignity.

Adding her voice to this call for justice and equality, Irina Bokova, Director-General of UN Educational, Scientific and Cultural Organization (UNESCO), pointed to evidence that shows that LGBTI young people are overwhelmingly exposed to stigma, discrimination and violence, with tragic consequences, including lifelong trauma and self-harm.

“For instance, a 2014 study, conducted in Thailand with support from UNESCO, revealed that 56 per cent of LGBT students had reported bullying in the last month. A significant proportion of [them] reported missing classes, feeling depressed, having unprotected sex, or had attempted suicide,” Ms. Bokova said.

She highlighted the 2016 meeting of Ministers of Education at UNESCO in Paris, set to be held on the International Day against Homophobia and Transphobia next year, to launch the first global report on the status of education sector responses to homophobic and transphobic violence, including bullying. She said this will provide a review of the scope and consequences of the phenomenon across regions, with examples from across the world that illustrate a holistic education sector responses, and recommendations for improvements in existing policies.

Also ahead of the International Day, which this year falls on Sunday, a group of UN and international human rights experts also called on States to act to overcome prejudice and stereotypes through anti-discrimination initiatives in schools and public education campaigns. States must address intersectional discrimination and violence against LGBT and intersex youth on the basis of race and ethnicity.

“LGBT young people too often face rejection by their families and communities who disapprove of their sexual orientation or gender identity. This can result in high rates of homelessness, social exclusion, and poverty,” the experts said.

What’s more, LGBT children are often bullied by classmates and teachers, resulting in some students dropping out. They may even be refused school admission or expelled on the basis of their actual or perceived sexual orientation or gender identity.

“The stigma and discrimination LGBT children and young adults face have a detrimental impact on their self-esteem, and are associated with higher rates of depression and suicide than their peers,” the experts emphasized.

In some countries, young LGBT persons are subjected to harmful so-called ‘therapies’ intended to ‘modify’ their orientation or identity. Such therapies are unethical, unscientific and ineffective and may be tantamount to torture, the experts explained.

Intersex children and young people may be subjected to medically unnecessary, irreversible surgery and treatment without their free and informed consent. These interventions can result in severe, long-term physical and psychological suffering, affecting children’s rights to health and privacy and may constitute torture or ill-treatment. States should prohibit such interventions.

They called on States to comply with their obligation to protect and fulfil the rights of all children and young adults without discrimination, to ensure that lesbian, gay, bisexual, transgender and intersex children and young people are consulted and participate in discussions on policies and laws that impact on their rights.

♦ Receive daily updates directly in your inbox - Subscribe here to a topic.
♦ Download the UN News app for your iOS or Android devices.
phobia

'Speak up, speak out' against homophobia, UN urges on International Day

Leading the United Nations family's push to help build a world rooted in tolerance where lesbian, gay, bisexual, and transgender (LGBT) persons live free from discrimination, Secretary-General Ban Ki-moon marked the International Day against Homophobia and Transphobia with a strong plea for action: “Equality begins with you.”