At Security Council, UN officials warn against 'waning' global attention to plight of civilians in Iraq

UN Photo/Loey Felipe
Special Representative and Head of the UN Assistance Mission for Iraq (UNAMI), Ján Kubiš, addresses the Security Council meeting on the situation concerning that country.
14 May 2015

The complexities and complications surrounding the plight of civilians in Iraq remain “enormous” amid slow political progress and ongoing violence throughout the country, a senior United Nations official warned today as he urged the international community to support the Gulf State's efforts towards stability and peace.

“Iraq is temporarily unable to cope alone with the challenges of the security and humanitarian crisis and stabilisation and rehabilitation efforts,” UN Special Representative for Iraq Ján Kubiš told the Security Council in a briefing this morning.

“Unfortunately, however critical is the urgency of continuous and massive support for Iraq, the international community's response is grossly insufficient, as if the existence of other old and new crises were enough to excuse a waning attention to the plight of Iraq and its people.”

Upstaged by other regional conflicts which have distracted the international community, the conflict in Iraq continues to smoulder as Iraqi Government forces clash with militants aligned with the Islamic State of Iraq and the Levant, or ISIL, in battles over the country's territory.

Mr. Kubiš, who is also head of the UN Assistance Mission for Iraq (UNAMI) was appointed to his role in late February, explained that vast areas of Iraq and millions of Iraqis remained under ISIL control and influence, subjected to the extremist group's radical ideology as well as “horrendous crimes and human rights violations.”

“It is important that local fighters and authorities are properly empowered to take their share of responsibility for the liberation from ISIL and for holding and governing of their areas,” the Special Representative continued. “All that, and notably military supplies and assistance, must be coordinated with and sanctioned by the respective authorities of the State.”

The military option, however, could only be part of the overall solution to bringing Iraq back from the brink, Mr. Kubiš added. For any military gains to be sustainable, the Government in Baghdad would have to “restore the confidence of disaffected communities” and restore civilian responsibility for security and the rule of law in liberated areas. Above all, the establishment of a transparent political process would be fundamental towards the creation of a peaceful and stable future.

“Political processes, national reconciliation efforts are essential to the underlying challenges facing Iraq and its unity creating sustainable solutions for peaceful co-existence, cooperation and development of Iraq's diverse components,” he said. “These efforts towards political dialogue must also be accompanied by efforts to promote reconciliation at the community level.”

Against that backdrop, the international community's assistance for Iraq and its people – through “continuous and long-term adequate political, financial, and material support” – remain critical if the country is to turn its opportunities into reality, according to Mr. Kubiš.

Such assistance will be particularly important if the country is to recover from its brimming humanitarian crisis.

According to the UN Office for the Coordination of Humanitarian Affairs (OCHA), nearly 7 million people, or 20 per cent of the population, are unable to access essential health services, water and sanitation services due to the country's conflict. Food insecurity, meanwhile, has increased by 60 per cent in six months with 4.4 million people now requiring food assistance. And over 1 million of the 2.8 million internally displaced persons (IDPs) in Iraq need shelter.

Addressing the 15-member Council this morning, OCHA chief Valerie Amos also cautioned delegates that as the duration and scale of the Iraq crisis increased, so did its urgency and the need for international assistance, particularly as the humanitarian situation had now become “deeply worrying.”

“We must do more to protect Iraqi civilians from these rising levels of violence,” Ms. Amos affirmed. “We must work to expand the assistance provided to affected people in all parts of the country.”

She told the Council that she is “extremely concerned” about the wellbeing of the millions of Iraqis who live in areas outside Government control, including under ISIL control. Next month will mark one year since the attack on Mosul and the spread of ISIL in the country.

“Reports indicate deteriorating conditions in these areas, including diminishing access to clean water, medical care, and food,” she said, underscoring that most of these areas remain largely out of the reach of humanitarian organizations.

Ms. Amos, who is also the UN Emergency Relief Coordinator, observed that as funding shortfalls were restricting the UN's ability to scale up assistance, access and negotiation teams were nonetheless on the ground working to expand the reach of relief efforts.

“Addressing humanitarian needs in Iraq requires collective action,” she declared. “A new Humanitarian Response Plan will be released in Brussels on 4 June and I hope donors will give generously.” 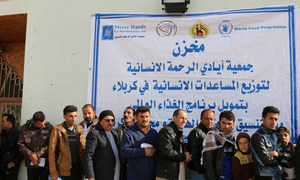 The United Nations’ humanitarian agencies are rushing support to thousands of Iraqis fleeing a flare-up in hostilities throughout the countrys Anbar Governate, the Organization confirmed today.