Amid reports of political upheaval in Burundi, United Nations Secretary-General Ban Ki-moon called urgently today on all parties in the country to exercise calm and restraint, and reminded the country's leaders of the need to preserve peace and stability.

“We are following from here with great concern developments on the ground in Burundi,” UN Spokesperson Stéphane Dujarric told reporters at the start of the regular daily briefing at the world body's New York Headquarters, adding that the Secretary-General urgently calls on all parties to exercise calm and restraint.

“He reminds all Burundian leaders of the need to preserve peace and stability in a country that has suffered so grievously from previous bouts of violence,” said Mr. Dujarric, emphasizing that the UN is evaluating developments amid a “very fluid” situation.

The Spokesperson said that Headquarters is in contact with UN Special Envoy for the Great Lakes Region Said Djinnit who is currently in Dar-Es-Salaam, Tanzania for the Summit of the East African Community.

A Flash Update released today by the UN Office for the Coordination of Humanitarian Affairs (OCHA) said that a coup d'état had reportedly taken place in the Burundian capital after President Pierre Nkurunziza left for the Summit, which was intended to try to resolve the crisis, although OCHA's update added that the situation is “rapidly evolving and confused,” with many reports emerging that are difficult to confirm.

The Flash Update said there were no significant new humanitarian developments since yesterday and noted official figures reported yesterday of 20 deaths and 200 wounded. It added that refugee numbers had risen above 70,000.

According to the UN Refugee Agency (UNHCR) figures, 25,455 people had crossed into Rwanda as of 11 May, with 8,750 in Democratic Republic of the Congo as of 12 May, and 37,474 as of 13 May in Tanzania, comprising 15,452 new arrivals in Nyarangusu Camp. A further 20,000 were reported to be waiting in Kagunga village, and 2,022 on the way to Nyarangusu Camp. Several hundred people were reported to be in hard-to-reach areas with limited support.

Some people were reported by the Office of the United Nations High Commissioner for Human Rights (OHCHR) to have returned to southern Burundi after initially fleeing to Tanzania, citing worsening humanitarian conditions, particularly around Kagunga village. 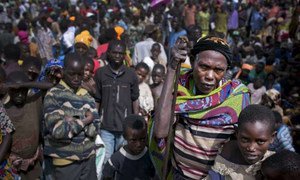 The eruption of pre-election violence in Burundi last month has seen over 50,000 people flee to neighbouring countries and threatens to undo some of the most promising developments in recent refugee history in Africa, the United Nations body tasked with protecting displaced people said in Geneva today.