UNHCR/A. Al-Sharif
Children play as a donkey cart passes destroyed buildings in the Al-Ora's neighbourhood of Zinjibar, Yemen.
12 May 2015

Nearly 200 civilians have died in Yemen in the past week, as the country has seen its deadliest period of fighting since violence broke out on 26 March this year, according to figures released today by the United Nations human rights office.

In the six days from 4 May to 10 May, the Office of the UN High Commissioner for Human Rights (OHCHR) said that at least 182 civilians have died, with 41 of those women and 51 children. In total, the Office verified the deaths of 828 civilians since 26 March, 182 of whom were children and 91 of whom were women. A further 1,511 people have been injured.

“A significant proportion of the casualties over this most recent six-day period – around half – were reportedly caused by airstrikes, especially in Sa'ada Governorate,” OHCHR spokesperson Rupert Colville told reporters in Geneva. “On one occasion, on 6 May, dozens of people fleeing fighting in Al-Tawahi District in Aden Governorate took to boats aiming for Djibouti, when they were shelled by mortars apparently fired by members of the Popular Committees affiliated with the Houthis. The boats caught fire and there were casualties.”

Civilian houses have been struck by airstrikes and ground fire, the Office reports, with at least 66 public buildings reported to have been partially or completely destroyed, as well as much civilian infrastructure.

“Given this alarming escalation, we welcome the announcement of a five-day humanitarian pause in Yemen, due to start today,” said Mr. Colville. “This should enable desperately needed aid operations to be carried out, and it is essential that it is honoured by all sides to the conflict.”

The pause comes as Ismail Ould Cheikh Ahmed, the UN Special Envoy for Yemen, arrived in the capital, Sana'a, where he hopes to meet the various Yemeni parties, in particular Houthi representatives, and the hope is that the pause can serve as a basis for a more permanent cessation of hostilities.

An aid shipment arrived at the port of Hodeida on Friday, a spokesperson for the Office of the UN High Commissioner for Refugees (UNHCR) said today at the same briefing, adding that preparations were underway for a possible huge airlift of humanitarian aid if the pause in fighting holds.

The plan, according to spokesperson Adrian Edwards, is for three flights to bring in 300 tonnes of sleeping mats, blankets, kitchen sets and plastic sheeting.

“Hundreds of thousands of people across Yemen are struggling to meet their basic needs and are in desperate need of help,” he said. “In addition to the flights, UNHCR will be seeking to distribute more of the aid we already have in Yemen, and to carry out rapid needs assessments in previously hard-to-reach areas. Our staff and partners are preparing to give relief kits out to tens of thousands of displaced people.”

UNHCR also plans to use the pause in hostilities to transport and pre-position aid to Sana'a, Amran, Haradh and Aden for onward distribution to vulnerable populations in surrounding provinces. Medicines and rations will be sent to the Mayfa'a reception centre in the east, and food, kerosene and diesel will be transferred to the Kharaz refugee camp, near Aden.

“While a humanitarian pause falls short of the peace so vitally needed in Yemen, it is nonetheless critically important that aid gets through, as existing stocks in country are becoming depleted, adding to the suffering of civilians,” Mr. Edwards said.

The World Food Programme (WFP) is also ready to distribute emergency food rations to more than 750,000 people in conflict-hit areas and is attempting to bring in fuel supplies to the country.

Ahead of the pause in fighting, the Director-General of the UN Educational, Scientific and Cultural Organization (UNESCO) called on all parties to the conflict to protect Yemen's unique heritage amid reports of severe damage to cultural sites, including the old cities of Sana'a, which was heavily bombed on the night of 11 May, and the old city of Sa'ada.

“I condemn these destructions and I call on all parties to keep cultural heritage out of the conflict”, said the Director-General, Irina Bokova, in a statement.

“I am particularly distressed by the news concerning air strikes on heavily populated areas such as the cities of Sana'a and Sa'ada. In addition to causing terrible human suffering, these attacks are destroying Yemen's unique cultural heritage, which is the repository of people's identity, history and memory and an exceptional testimony to the achievements of the Islamic Civilization".

Ms. Bokova stressed that all parties should respect their obligations under international treaties, particularly the 1954 UNESCO Convention on the Protection of Cultural Property in the Event of Armed Conflict and its two Protocols, as well as the 1972 World Heritage Convention. 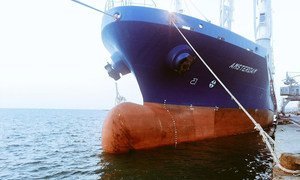