A new earthquake measuring 7.3 in magnitude has struck Nepal today killing at least 40 people, according to information received by the United Nations, just two weeks after a powerful tremor killed more than 8,000 thousand people and devastated much of the country’s infrastructure.

The epicentre of the quake was 76 kilometres northeast of Kathmandu – an area already impacted by the 25 April quake, Office for the Coordination of Humanitarian Affairs (OCHA) said in a flash update.

“We had a major aftershock. It really seemed like another earthquake because it was pretty violent, not as violent [as the first], but it went on for a very long time. I work with UNICEF so I was in the office along with my colleagues,” she said.

“We’re all geared to provide relief and then there was this major jolt and you thought okay, ‘maybe it will go away,’ but it didn’t. It just got stronger. Four or five of us just ducked under the nearest table we could find and held on to each other waiting for it to go away but it just went on rocking and rocking and rocking for a long time,” Ms. Foley said.

According to OCHA, landslides were reported in Langtang Region in the Himalayas. Many areas around the epicentre are particularly susceptible to landslides. Five people were reported rescued in Charikot. Reports of people buried under rubble are also coming in from across the country, including from Tatopani.

Some buildings damaged by the 25 April quake collapsed today and new damage to housing and infrastructure is also being reported across the districts. The existing camps in Chautara remain open and are accommodating additional people. People in other areas are also expected to remain in the open air areas.

The Nepalese Army is requesting additional shelter as it expects people to stay in the open overnight. National search and rescue (SAR) teams have been deployed. The Government of Nepal advised it dispatched military helicopters to assess damage and possibly provide emergency health assistance.

The Government has also asked the hospitals in affected areas, including Kathmandu, to remain on stand-by to treat the injured. No request for international SAR teams was made. International SAR teams, which remain in the country, were requested to support the response. 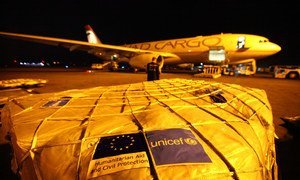 In Nepal, UN and relief agencies race against time as monsoon season nears

Two weeks after a devastating 7.8 magnitude earthquake struck Nepal, emergency responders are racing against time to reach affected populations in the mountainous country's most remote regions, the United Nations Office for the Coordination of Humanitarian Affairs (OCHA) has announced.