UNICEF/Naser Siddique
A child with his mother.
11 May 2015

Calling for greater “social protection” for women as the United Nations draws up a new development agenda, the International Labour Organization (ILO) has cited alarming statics, including that some 800 women die in child birth every day, only 28 per cent of employed women receive cash benefits during their maternity leave, and that child poverty is rising in 18 of 28 countries in the European Union.

“At a time when the world is discussing a post-2015 development agenda, it is essential that the international community identifies financing sources for social protection,” or social security guarantees to protect them against economic distress and hardship caused by the absence or a substantial reduction of income from work because of illness, maternity, lack of employment, disability, old age and others, Isabel Ortiz, Director of the ILO Social Protection Department said as the agency released two new studies late last week.

In the Social protection for maternity: Key policy trends and statistics report, ILO notes that only 36 per cent of employed women are legally entitled to cash benefits during their maternity leave.

“In practice, however, maternity leave legislation is not implemented effectively, so only 28 per cent of working women are covered in case of maternity,” ILO said in a press release.

“Around 800 women die from childbirth every day. In addition, 18,000 children also pass away daily. The sad reality is that despite efforts carried out as part of the Millennium Development Goals process, maternal and child mortality rates in developing countries are still very high,” according to the UN labour agency.

“Most of these deaths are preventable with adequate social protection. Universal maternal and child health care is key to reducing high mortality rates, together with cash transfers to ensure adequate food, clothing, and access to social services,” added Ms. Ortiz.

ILO said a related report, Social protection for children: Key policy trends and statistics, also paints a worrying picture. While there has been an explosion of small cash transfer schemes in recent years, the study shows, there is also a considerable gap with regard to the availability of adequate child and family benefits.

A worrying trend, according to ILO, is that in some countries, the levels of maternity and child protection benefits have dropped as a result of fiscal consolidation policies.

For example, it said, several European countries have reduced the level of maternity and child benefits or have limited the level of coverage, leading to an increase in child poverty in 18 of the 28 countries of the European Union between 2008 and 2013.

The reports include detailed national data on maternity protection and child and family benefits for 188 countries surveyed. 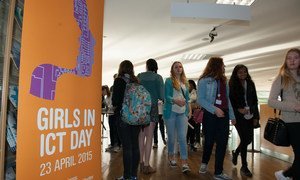 Aiming to attract women to fields “where strong demand is creating global skills shortfall,” the tech community is gearing up to celebrate ‘Girls in ICT Day’ around the world.