UNHCR/K. Holt
An elderly woman waits among a crowd of other Burundian refugees for assistance in Rwanda’s Mahama Refugee Camp.
8 May 2015

The eruption of pre-election violence in Burundi last month has seen over 50,000 people flee to neighbouring countries and threatens to undo some of the most promising developments in recent refugee history in Africa, the United Nations body tasked with protecting displaced people said in Geneva today.

“Many of these have crossed into Rwanda (25,004), but over the last week we have also seen a sharp increase in people seeking asylum in Tanzania (17,696) after entry restrictions there were lifted,” said, Adrian Edwards, spokesperson for the Office of the United Nations High Commissioner for Refugees (UNHCR), briefing journalists in Geneva.

“In addition, almost 8,000 people have crossed into South Kivu province in the Democratic Republic of the Congo. In all these cases women and children, including a large number of unaccompanied children, are in the majority,” he said.

Mr. Edwards praised solutions found, following the end of Burundi’s civil war in 2005, to address the plight of many thousands of formerly displaced people after over a decade of conflict. These have included one of the world’s largest and most successful voluntary return programmes for Burundian refugees – with UNHCR helping the country to re-integrate almost half a million people into society.

Neighbouring Tanzania was among countries that hosted large numbers of Burundian refugees who fled violence in 1972. In recent years, Tanzania offered citizenship to around 200,000 of them and their descendants, which is the largest number of refugees UNHCR has ever seen locally integrated by a host country. Thousands of others have been successfully resettled overseas, including more than 8,000 in the United States.

He added that new arrivals in Rwanda spoke of harassment and intimidation by Imbonerakure youth militants. Many new arrivals came from northern Burundi but those leaving urban areas, including a number of high school and university students, has increased.

“With the Government of Rwanda, we are now moving the refugees to a new refugee camp, Mahama, which can host up to 60,000 refugees,” said Mr. Edwards. “Many people have experienced difficulties while trying to leave Burundi. Several women have reported threats of rape from armed men, and having to bribe their way through roadblocks. Some have walked for hours through the bush with their children.”

Mr. Edwards also described local efforts, supplemented by UNHCR support, in Democratic Republic of the Congo, where 7,661 Burundians have registered as refugees, and said 13,000 people were awaiting processing in Tanzania, with 10,000 on Kagunga island on Lake Tanganyika.

“We have started to relocate them with the help of an old ferry that can carry a maximum of 600 people,” said Mr. Edwards. “All asylum seekers are being transported from villages and islands to Nyarugusu refugee camp, where they will receive a plot of land on which they can build a shelter and grow some vegetables.”

Concerns over the political crisis in Burundi turning into a humanitarian one were echoed by a spokesperson from the World Food Programme (WFP), who said she was also concerned about the tens of thousands of people leaving the country.

WFP is providing food and nutrition assistance to more than 25,000 Burundian refugees in Rwanda, said Elisabeth Byrs, with the agency and other humanitarian partners preparing to assist 50,000 to 100,000 refugees in Rwanda.

Resources are stretched by the influx, she said, adding that WFP is on the ground in a new transit camp and three transit centres providing food assistance to Burundian refugees, starting with High Energy Biscuits.

She said a quarter of the children arriving in the transit camp at Mahama are malnourished and WFP is providing hot meals and ready-to-use supplementary food to help them recover. Additionally, the WFP would start blanket supplementary feeding for all young children as soon as possible to avert any further deterioration of refugees’ nutritional status.

Turning to the challenges that the WFP was facing, Ms. Byrs said that the WFP in Rwanda did not have enough resources to respond to the food needs of the increasing number of refugees from Burundi. The agency had been able to mobilize some emergency funding, allowing them to immediately respond to the initial needs, but that was not enough to sustain assistance, especially if the number of refugees kept rising. WFP urgently needed a minimum of $5 million to meet food needs of 50,000 to 100,000 refugees who could arrive in the coming six months. 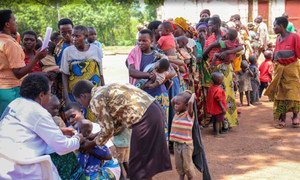 The Office of the United Nations High Commissioner for Human Rights has expressed its deep concern about measures taken this week by Burundian authorities to seriously curtail rights to freedom of expression and assembly, urging measures to ensure the space necessary for the conduct of free and fair elections in the country.