The international community must seize the opportunity to hold open, comprehensive and in-depth discussions on the world drug problem at next year’s General Assembly special session devoted to the issue, a senior United Nations official said today amid appeals for a clampdown on transnational drug trafficking networks and their criminal offshoots.

“From West Africa to Central Asia, we see how international drug trafficking jeopardizes peacebuilding efforts and bolsters terrorist groups,” Deputy Secretary-General Jan Eliasson declared in remarks delivered at this morning’s High-Level Thematic Debate in support of the 2016 special session of the General Assembly on the issue.

“At the international level, the ever stronger links between transnational organized crime, terrorism and extremist violence constitute a very serious new threat,” he added.

As the international drug trade courses across continents and oceans, involving numerous partners such as organized crime syndicates and terrorist groups, it poses an increasing threat to national, regional, and international peace and security, he warned.

According to the latest World Drug Report issued by the Vienna-based UN Office of Drugs and Crime (UNODC), evidence shows that Afghan heroin is increasingly reaching new markets, such as Oceania and South-East Asia, that had been traditionally supplied from South-East Asia.

Meanwhile, as the long-established Balkan route seems to remain a corridor for the transit of Afghan heroin to the lucrative markets in Western and Central Europe, the so-called “southern route” is expanding, with heroin being smuggled through the area south of Afghanistan reaching Europe, via the Near and Middle East and Africa, as well as directly from Pakistan.

That is why, Mr. Eliasson continued, tackling drugs and crime is included in the mandates of UN peace operations in countries such as Guinea-Bissau and Afghanistan as part of a wider effort to shore up “hard-won progress on peace, development, respect for human rights and the rule of law.”

In his opening statement to the gathering, General Assembly President Sam Kutesa similarly pointed out that no country or society is “immune from the menace of illicit drugs and their attendant effects.”

As an enterprise with annual proceeds estimated at $322 billion, drug trafficking had “infiltrated societies, governments and national and international institutions,” Mr. Kutesa warned, while also adding that only through “collective efforts” focused on prevention and international cooperation could Member States fight back successfully against the spread of drug networks.

“People must be at the centre of all our efforts and we must do what we can to support and empower them to overcome their vulnerabilities, which exposes them to illicit drugs and crime,” said Mr. Kutesa.

“Combating the world drug problem is an urgent and imperative need,” he declared, adding that countries have been fighting back with some success, but the resources directed at this problem could have been more effectively utilised for development.

“Our collective efforts must focus on prevention, while also rendering treatment and care to persons affected by drug addiction and those needing help to alleviate pain and suffering. We must also scale up interventions and international cooperation to resist and combat drug-related international organized crime,” he said.

Against that backdrop, the Deputy Secretary-General cautioned that the human cost of the drug trade continued to remain tragically high.

For instance, the UNODC has also observed that global drug use continues to exact “a significant toll, with valuable human lives and productive years of many persons being lost.” In its Report, the agency notes that an estimated 183,000 drug-related deaths were reported in 2012.

Just last December, the UNODC launched a programme in tandem with the Colombian Government and the Austrian chocolate manufacturer Zotter to help wean Colombian farmers off of revenues from illicit drug crops and replace them with those from cacao cultivations.

The project is part of a wider UN-backed campaign – known as “Montebravo” – which reaches over 120,000 farmer families and was set up to help reduce the economic dependence of farmers on coca leaf production.

“The evidence is clear,” Mr. Eliasson affirmed, “around the world, we see that countries which integrate public health into drug control work achieve greater health effects and social benefits, while at the same time improving rule of law and security.”

“When we meet in April next year, we must be ready to challenge ourselves, try to consolidate our approaches and integrate a range of perspectives on drug issues.” 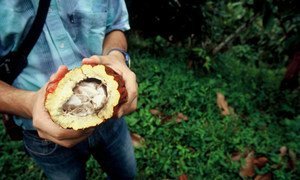 A sweet new partnership between the United Nations, the Colombian and Austrian Governments and a renowned chocolate manufacturer is slated to bring free-trade practices and a critical source of income to Colombian farmers who have long relied on revenues from illicit drug crops, the Organization’s Office on Drugs and Crime (UNODC) has announced.