A new United Nations-backed report on the link between forests and food production and nutrition says that woodlands could be the key to ending hunger and will be intimately linked to the global fight against climate change.

Launched today at UN Headquarters in New York, where the 11th session of the UN Forum on Forests is under way, the Forests, Trees and Landscapes for Food Security and Nutrition report outlines the potential of forests to improve food security and nutrition, and to ensure the livelihoods of the world’s most vulnerable people.

“What the report is trying to get us to focus on is the relatively neglected contribution that forests and trees make to food security and nutrition,” said Bhaskar Vira, who serves as Chair of the Expert Panel on Forests and Food Security. “Not necessarily neglected by the people who actually consume them but possibly neglected in some of the policy discourses.”

He stressed that it was understood in the report that conventional agriculture would remain the major source of people’s nutrition needs but underlined the complementary role that forests and tree-based systems would also play in feeding the world.

“We’re not trying to suggest that forests and tree-based systems will replace agricultural in relation to the critical relationship between crops and food,” said Mr. Vira. “But what we document in extensive detail is the role that forests and tree-based systems already play in supplementing people’s diets and the important roles they play in supplying people with a nutritionally balanced diet.”

The report, which is based on existing knowledge, was put together by more than 60 renowned scientists who are part of the Global Forest Expert Panel (GFEP) on Forests and Food Security. The initiative was led by the International Union of Forest Research Organizations (IUFRO) – a world-wide organization devoted to forest research and related sciences, and a member of the Collaborative Partnership on Forests (CPF), which is an informal arrangement among 14 international organizations and secretariats with substantial programmes on forests.

The current session of the Forest Forum is trying to forge an international forest policy for the next 15 years that will be aligned with the new sustainable development agenda expected to be adopted in September. The current integration of forests into the new agenda demonstrates the increasing recognition of the critical role forests play in eradicating poverty, as well as addressing climate change.

“Conservation of forests and arresting deforestation remains the most affordable and most interesting and valuable cost-benefit option to decrease carbon emissions,” said Manoel Sobral Filho, Director of the UN Forum on Forests Secretariat, who also stressed how crucial the current year was as the international community discussed a new development agenda and he noted that forests were to be included in two of the proposed new sustainable development goals. 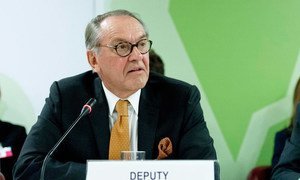 Opening the eleventh session of the United Nations Forum on Forests today, the Deputy Secretary-General, Jan Eliasson, today called on delegates to work on agreeing a strengthened International Arrangement on Forests, which balanced ambition and practicality.