By the end of 2014, a record-breaking 38 million people had been forced to flee their homes within their own country because of conflict or violence, prompting the United Nations refugee agency to appeal today for “an all-out effort to bring about peace in war-ravaged countries.”

The Norwegian Refugee Council (NRC) along with one of its partners, the Office of the UN High Commissioner for Refugees (UNHCR), released these alarming figures at a joint press conference in Geneva to launch the report, Global Overview 2015: people internally displaced by conflict and violence.

The report, compiled by the NRC's the Internal Displacement Monitoring Centre (IDMC), revealed that 38 million people have been internally displaced by conflict or violence, the equivalent of the total populations of London, New York and Beijing combined, representing a 4.7 million increase compared to 2013.

With internal displacement figures reaching a record high for the third year in a row, the report also shows that 11 million people were newly displaced by violent events throughout 2014, which amounts to 30,000 people forcibly displaced every day.

The report showed that Syria, with 7.6 million displaced people or at least 40 per cent of its population, makes it the country with the largest number of internally displaced persons (IDPs) in the world, and Iraq, suffered the most new displacement, with at least 2.2 million people fleeing in areas that fell under Islamic State control.

“We know that more and more internally displaced have been forced to move within their country multiple times,” said Volker Türk, UNHCR’s Assistant High Commissioner for Protection. “The longer a conflict lasts, the more insecure [displaced persons] feel and when hopelessness sets in, many will cross borders and become refugees.”

Mr. Turk noted that “as we have seen in the recent past, for example in the Mediterranean, despair drives people to take their chances and even risk dangerous boat journeys.”

NRC Secretary-General Jan Egeland said: “This report should be a tremendous wake-up call. We must break this trend where millions of men, women and children are becoming trapped in conflict zones around the world.”

Mr. Turk agreed, saying: “The obvious solution lies in an all-out effort to bring about peace in war-ravaged countries.”

The 2015 Global Overview also highlights how long-lasting, or protracted, displacement contributes to this alarmingly high global total. In 2014, there were people living in displacement for 10 years or more in nearly 90 per cent of the 60 countries and territories monitored by the report.

The figures also shows that 60 per cent of people newly displaced were in five countries alone: Iraq, South Sudan, Syria, the Democratic Republic of Congo (DRC) and Nigeria, where Boko Haram’s campaign to control territory and impose Islamic law in north-eastern Nigeria have driven hundreds of thousands of people from their homes.

And for the first time in more than a decade, Europe had massive enforced displacement caused by the war in Ukraine, where 646,500 people fled their homes in 2014.

The report, based on data provided by governments, non-governmental organization partners and UN agencies, deals with internal displacement within the countries, and it not to be confused with UNHCR’s Global Trends Report due next month, which will focus on the number of refugees, or those who have been forced to flee their countries entirely.

♦ Receive daily updates directly in your inbox - Subscribe here to a topic.
♦ Download the UN News app for your iOS or Android devices.
displaced

Solutions for Kenya’s displaced must be determined by reality, not politics – UN expert 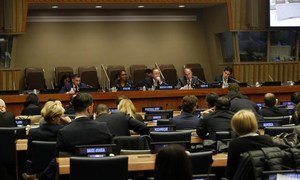 Looking ahead to the World Humanitarian Summit in Istanbul next year, the United Nations Secretary-General today stressed how news stories were serving to compel the international community into agreeing to align major global commitments to support the world’s most vulnerable people.